Bring Back the Bluebirds Project Update: Eight successful nests in 2014 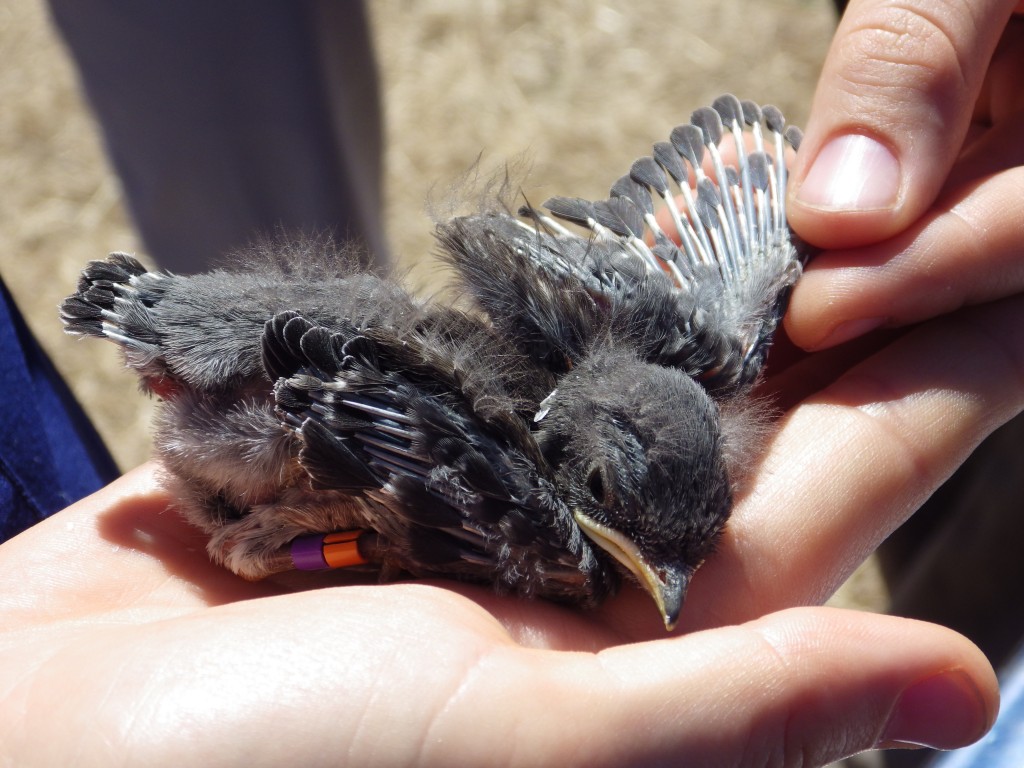 GOERT and our partners have undertaken an ambitious species recovery project to restore an extirpated regional Western Bluebird population to the Salish Sea area. 2014 was our 3rd year of active translocations and releases of breeding bluebirds and nestlings to the Cowichan Valley. Learn more at www.goert.ca/bluebird.

Last week marked the official end of the 2014 field season for the Bring Back the Bluebirds Project. With 4 families leaving their nesting territories several days earlier than expected, and a 5th showing a decreasing interest in their supplemental feeder, we leave the Cowichan Valley confident that the 5 breeding pairs and th eir many juveniles are finding an abundance of naturally-occurring prey to build up their energy reserves for their fall migration.

Looking back on the breeding season, this has been an impressive year: we saw both a greater number of bluebirds returned and a higher success rate with translocations than in 2012 or 2013. The season began with the return of 8 bluebirds, including 2 breeding pairs and 4 of their offspring (all males) that had hatched in the Valley last year. Between March and May, 6 breeding pairs were translocated from southern Washington and released after acclimatizing briefly in aviaries. While 2 pairs headed immediately south again after being released, 7 translocated pairs decided to remain in the Valley and select a breeding territory from amongst our many nestbox host properties. In June, 3 more breeding pairs, along with their first broods, were translocated and released. These families also remained in the valley as the breeding pairs went on to establish a territory for their second nests of the season.
With more breeding pairs than in the past, it makes sense that we also saw more successful nests, more failed nests, higher mortality and, most importantly, more bluebirds hatched this season.

With so many breeding territories came a host of novel situations to be adapted to and challenges to be overcome. Predators claimed the lives of nestlings, adults, a juvenile, and even entire clutches very early on in the season. We responded to the threat of depredation by adopting of a wide variety of customized predator guards and surveillance around the bluebird nestboxes. Another novel threat this year was competition with non-native English House Sparrows. While the threat of House Sparrows loomed at almost every territory, one bluebird pair had two successive nests attacked by the aggressive, territorial birds. The various competitor management strategies we applied were not enough to prevent the attacks, which claimed the lives of several nestlings and required the lengthy rehabilitation of four others.

Fortunately, every nest with a predator exclusion device located a safe distance from a large House Sparrow population fledged nestlings. Consequently, we are pleased to announce that 8 successful bluebird nests produced as many as 50 juveniles this season. The incorporation of the aforementioned strategies to safeguard each nest, the involvement of Salt Spring Island’s Island Wildlife Natural Care Centre, participation of several invaluable volunteers and, of course, the perseverance and determination of the bluebirds, all contributed to the Project’s success this breeding season.

Looking ahead to 2015, it is hard to predict what might happen. The two bluebird pairs that returned to the Valley are no more, after both females were eaten on their nest by a predator; will the males return next season with new mates? Will any of the translocated pairs that bred here successfully return next year? This year all of the unpaired bluebirds that returned to the Valley for their first breeding season were males; next year the sex ratio may not be as skewed, allowing for the formation of new breeding pairs.

Finally, it is thought that only a very small percentage of bluebirds will return to where they were hatched the previous year; however, if 4 bluebirds–of approximately 40 that hatched in 2013–returned this year, even more may return next year. For the answers to these questions and many others, we will have to wait until next spring. In the meantime, Cowichan Valley residents can continue to enjoy the sights and sounds of bluebirds into September. By October, those of us that live further south should be on the lookout for these bluebirds as they begin to migrate. We encourage you to report any sightings to bluebird@goert.ca or by calling 250-383-3427.

To learn more about the Bring Back the Bluebirds Project and other oak ecosystem conservation projects, check out our most recent enews by clicking here. To support the project, visit http://www.goert.ca/support/donate.php or become a GOERT member. 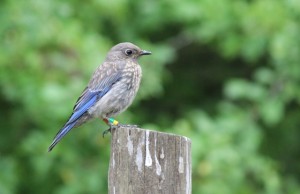 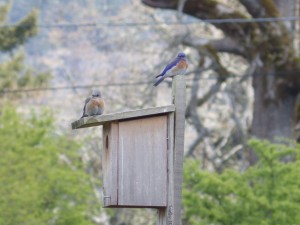 Social Share
Copyright 2018
This page is managed by the Center for Natural Lands Management for the Cascadia Prairie Oak Partnership. All rights reserved.