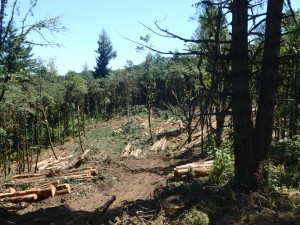 This is an abridged version of an article originally posted on the Pacific Birds Habitat Joint Venture website. To read the full article, click here.

Baskett Slough National Wildlife Refuge (NWR) consists of nearly 2500 acres within the mid-Willamette Valley in Oregon. It is part of the larger Willamette Valley National Wildlife Refuge Complex, which encompasses three refuges that protect historically significant oak savanna, prairie, riparian and wetlands habitats. The refuge supports a rare community of upland prairie, oak savanna, and oak woodland habitats. Consequently it is home to many important and rare taxa including Fender’s blue butterfly, Kincaid’s lupine, Willamette Daisy, as well as priority landbird species such as the Western Bluebird and Slender-billed Nuthatch. The prime oak habitats on the Refuge also support avian species such as the Bewick’s Wren, Black-capped Chickadee, Black-headed Grosbeak, Bushtit, House Wren, Spotted Towhee, Western Bluebird, Western Tanager, Western Wood-Pewee, and many more. The Streaked Horned Lark, which breeds on the Refuge, is listed as critical on the Oregon sensitive species list and is a federally listed threatened species.

Oak woodlands that have been invaded by Douglas-fir, in some cases for over a hundred years, simply cannot be maintained. Nearly a hundred acres of oak woodland habitat on the North Butte of Baskett Slough NWR has been invaded by fir and was in various states of overtopping. Refuge staff recognized that if the fir was not removed in the near future all of the oak would be lost. In 2014, a 38-acre project was initiated to harvest Douglas-fir, saving the oaks from imminent mortality and thereby benefiting the numerous oak dependent landbirds that thrive in these declining habitats. In 2015, a 20-acre phase II project was completed. Many of the harvested fir logs are or will be used for in-stream fish restoration projects throughout the Willamette Basin.

Both of these projects complement significant oak woodland, oak savanna, and upland prairie work being done in the Baskett Butte neighborhood by private landowners, the Nature Conservancy, the Natural Resource Conservation Service, Polk County Soil and Water Conservation District, the U.S. Fish and Wildlife Service Partners for Fish and Wildlife Program, Oregon Watershed Enhancement Board, and many others. Once an additional 20 acres is completed in an upcoming phase III project, the Refuge expects to have restored nearly 100 acres of oak habitat. The Refuge will then be able to more passively manage this Oregon white oak woodland with a native dominated understory.

Reintroducing prescribed fire may not be possible in dense woodland with nearby private lands; however keeping seedling fir invaders at bay is now a manageable task. Additionally, the oak is saved so thinning to a more savanna like stand is a preserved option that would eventually allow burning. It may take a few years for the native shrubs to heal back in to desired levels, but the avian response is nearly immediate.

This is an abridged version of an article originally posted on the Pacific Birds Habitat Joint Venture website. To read the full article, click here.

About the Author
Social Share
Copyright 2018
This page is managed by the Center for Natural Lands Management for the Cascadia Prairie Oak Partnership. All rights reserved.