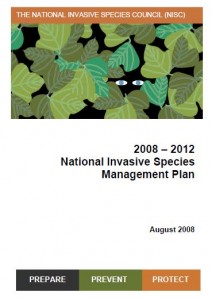 Completed in 2001, the National Invasive Species Management Plan, Meeting the Invasive Species Challenge (2001 Plan), served as a comprehensive “blueprint” for federal action on invasive species, as well as NISC’s primary coordination tool. This coordination tool provided the first comprehensive national plan for invasive species action. It called for about 170 specific actions within nine categories of activity, about 100 of which have been established or completed. Actions identified in the 2001 Plan continue to be implemented.

The 2008–2012 National Invasive Species Management Plan (2008 Plan) is the first revision of the 2001 Plan, as mandated by EO 13112. This document will direct Federal efforts (including overall strategy and objectives) to prevent, control and minimize invasive species and their impacts within the next five fiscal years (2008 through 2012). If necessary, it may be updated more frequently to reflect changes in circumstances, agency plans and priorities. NISC member agencies, ISAC members, NISC staff, stakeholders and other experts have provided input in drafting this revision, which replaces the 2001 Plan.

The 2008 Plan is focused upon five “Strategic Goals”: Prevention; Early Detection and Rapid Response; Control and Management; Restoration; and Organizational Collaboration. To accomplish these strategic goals, critical support for efforts such as research, data and information management, education and outreach, and international cooperation elements are included in pertinent sections of the 2008 Plan.

Each of the five strategic goals specifies on-going objectives and the long-term vision for success in that area. Under each strategic goal, “Objectives” describe what is to be accomplished over the next five years, and “Implementation Tasks” describe what agencies expect to do in order to accomplish that objective. Within the “Implementation Tasks”, there are “Performance Elements” which allow for measurement of progress towards accomplishing identified tasks.