CPOP and the Species-Specific Working Groups
The Cascadia Prairie-Oak Partnership (CPOP) is an ecoregional group that brings together conservation focused professionals that represent state, federal and local government, military, conservation groups and other entities interested in prairie-oak conservation. CPOP was created to increase coordination between these groups in order to promote conservation action, leverage funding, and expand recovery efforts. The Taylor’s checkerspot butterfly working group first convened in 2010 and meets annually to discuss and prioritize recovery actions.

What is an Action Plan and what is its purpose?
Each CPOP working group maintains an Action Plan, a document that lists the ‘next best tasks’ that can be taken to improve the status of the species and ranks the highest priority actions. Each year at the annual meeting the list is updated to reflect completed work, new opportunities and changes in urgency. The Action Plan is meant to encourage dialogue and consensus among the group as well as to inform entities that work with conservation policies and funding, such as US Fish and Wildlife Service, as to what actions are priorities to support the recovery of Taylor’s checkerspot butterfly.

Since the first Action Plan was created in 2009, the following notable tasks have been completed or have made substantial progress: 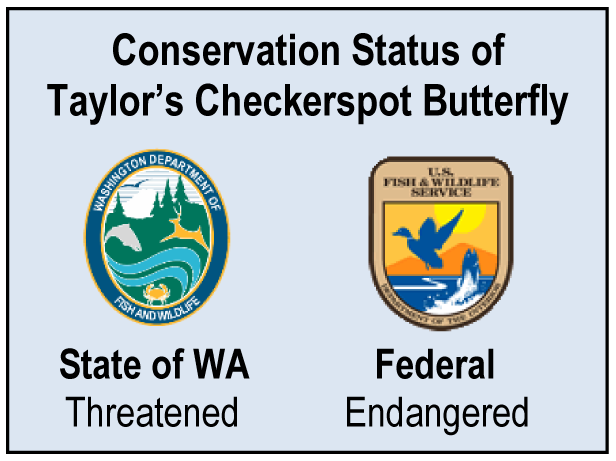 Click here to access information from the Edith's checkerspot workshop.
Copyright 2018
This page is managed by the Center for Natural Lands Management for the Cascadia Prairie Oak Partnership. All rights reserved.