The Mazama pocket gopher is a medium sized burrowing rodent that is endemic to western Washington, western Oregon and northern California.  Gophers tunnel underground, aerating the soil and creating mounds that are well suited to the growth of native wildflowers.  Of the nine subspecies, four (Olympia Tenino, Yelm and Roy) are found in prairies in south Puget Sound, the region of emphasis for this working group.  Due to declining and fragmented prairies habitat in the region, the population of these four subspecies is considered at risk.  In April 2014, the US Fish and Wildlife Service (FWS) designated four south Puget Sound subspecies of the Mazama pocket gopher as Threatened under the Endangered Species Act.

CPOP and the Species-Specific Working Group
The Cascadia Prairie-Oak Partnership (CPOP) is an ecoregional group that brings together conservation focused professionals that represent state, federal and local government, military, conservation groups and other entities interested in prairie-oak conservation. CPOP was created to increase coordination between these groups in order to promote conservation action, leverage funding, and expand recovery efforts. The Mazama pocket gopher working group first convened in 2010 and meets annually to discuss and prioritize recovery actions.

What is an Action Plan and what is its purpose?
Each CPOP working group maintains an Action Plan, a document that lists the ‘next best tasks’ that can be taken to improve the status of the species and ranks the highest priority actions. Each year at the annual meeting the list is updated to reflect completed work, new opportunities and changes in urgency. The Action Plan is meant to encourage dialogue and consensus among the group as well as to inform entities that work with conservation policies and funding, such as US Fish and Wildlife Service, as to what actions are priorities to support the recovery of the Mazama pocket gopher.

Since the first Action Plan was created in 2010, the following notable tasks have been completed or have made substantial progress: 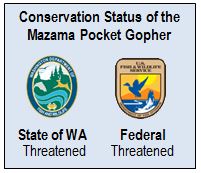