The streaked horned lark is a small ground dwelling bird that is endemic to the Pacific Northwest.  Small populations occur along Washington’s coast, through the Puget lowlands, and on lower Columbia River islands while a majority of the approximately 1,500 remaining individuals are found in the Willamette Valley. Relying on wide open spaces that have sparse vegetation, the streaked horned lark population has declined greatly with the loss of ideal habitat due to range contraction, land use conversion, and the encroachment of woody vegetation. In 2013, the US Fish and Wildlife Service listed the streaked horned lark as threatened under the Endangered Species Act.

CPOP and the Species-Specific Working Groups
The Cascadia Prairie-Oak Partnership (CPOP) is an ecoregional group that brings together conservation focused professionals that represent state, federal and local government, military, conservation groups and other entities interested in prairie-oak conservation. CPOP was created to increase coordination between these groups in order to promote conservation action, leverage funding, and expand recovery efforts. The streaked horned lark working group first convened in 2007 and meets annually to discuss and prioritize recovery actions.

What is an Action Plan and what is its purpose?
Each CPOP working group maintains an Action Plan, a document that lists the ‘next best tasks’ that can be taken to improve the status of the species and ranks the highest priority actions. Each year at the annual meeting the list is updated to reflect completed work, new opportunities and changes in urgency. The Action Plan is meant to encourage dialogue and consensus among the group as well as to inform entities that work with conservation policies and funding, such as US Fish and Wildlife Service, as to what actions are priorities to support the recovery of the streaked horned lark.

Since the first Action Plan was created in 2007, the following notable tasks have been completed or have made substantial progress: 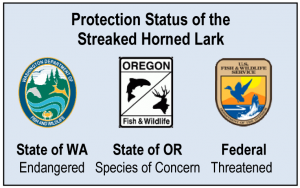