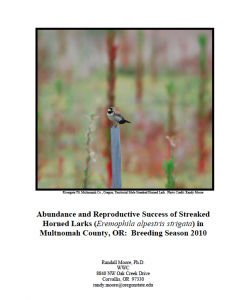 STHL breeding ecology in Multnomah County, however, may be distinct from that in the southern valley, as both the suburban/industrial landscape setting and at least some habitat types (dredge material deposition sites) differ. Details of STHL breeding ecology in this county may be of special import, as the small breeding population there appears to be the southernmost of a string of disjunct populations to the north of the continuously distributed mid-/southern Willamette Valley population. The nearest robust population to the south appears to be some 55 km. distant in northern Yamhill County (and may be considerably farther south than this; the area has not been formally surveyed), and the nearest known populations to the north are White’s Island (71 km.) in Oregon and the Olympia Airport (149 km.) in Washington.