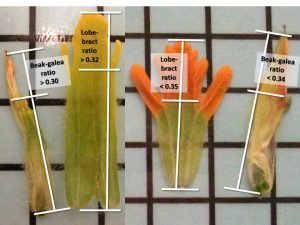 Castilleja levisecta (golden paintbrush) is one of Washington’s characteristic endangered species, restricted to the Pacific Northwest’s disappearing prairies.  To establish new populations, C. levisecta was seeded into restoration plots with other prairie natives including a closely related but more common Castilleja, C. hispida.  Together these two Castilleja species could provide host plants for the Taylor’s checkerspot butterfly (Euphydryas editha taylori), another endangered prairie species.  However, suspicion of the two Castilleja species hybridizing in the wild if their populations overlap has led to confirmation of viable hand-crossed hybrids.  Maintaining genetic separation of the two species is a high priority.  This field investigation was conducted to determine the potential to hybridize via natural pollinators, and how the growing-context of the plants affects their reproduction.  Analyzing the reproductive characteristics and the seeds of plants from plots with both Castilleja species and from plots with each grown alone, as well as pure-bred off-site controls, indicate the species differ in their flower and seed production, with C. levisecta having higher fitness than C. hispida in this study, as well differing in seed germination and their sensitivity to context differences.  C. levisecta reproduction was more inhibited by growth with C. hispida and pollinators showed no preference between the species.  The restoration site quality also influenced Castilleja reproduction, partly due to decreased pollinator activity.

Analysis of the produced F1 generation from control (single-species) contexts and mixed-species contexts, using pollen and flower characteristics indicate a similar pattern of context-effect on Castilleja reproduction. The growing context of the species and site characteristics were found to influence Castilleja reproduction and increase the occurrence of hybrids when growing within a 40 square meter plot.  Analyzing the reproductive characteristics identified distinguishing flower measurements for each species, particularly their proportions of bract lobing and galea beak proportions, as well as the angle of the flowers from the stem. Their pollen viabilities also indicate C. levisecta may have lower male fecundity than C. hispida, with hybrids having further decreased viability.  A relatively small proportion of hybrid offspring were identified from mixed-species growing contexts, and with a higher incidence in one species’ offspring than the other.