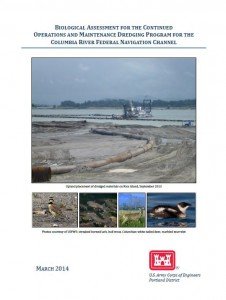 The U.S. Army Corps of Engineers, Portland District (Corps) prepared this Biological Assessment (BA) for the purpose of re-initiating consultation under Section 7 of the Endangered Species Act (ESA) of 1973, as amended. This document evaluates the effects on federally listed species and their designated critical habitats for the Columbia River Federal Navigation Channel (CR FNC), Operations and Maintenance (O&M) Program through 2018. This BA specifically describes the biological effects to streaked horned larks (SHLA) (Eremophila alpestris strigata) that may occur from the placement of material dredged from the Columbia River. Dredging the Columbia River maintains the CR FNC from the River Mouth to Bonneville Dam (River Mile (RM) -3.0 to 145), including the Mouth of the Columbia River (MCR) project, nine side channel projects (Baker Bay, Chinook Channel, Hammond Boat Basin, Skipanon Channel, Skamokawa Creek, Wahkiakum Ferry Channel, Westport Slough, Old Mouth Cowlitz River, and Upstream Entrance to Oregon Slough), and the Portland-Vancouver Anchorages.

Section 7 of the ESA states that Federal agencies shall ensure that any action they authorize, fund, or carry out is not likely to jeopardize the continued existence of a listed species or result in destruction or adverse modification to designated critical habitat (CH). Therefore, Federal agencies consult with the U.S. Fish and Wildlife Service (USFWS) and/or the National Oceanic and Atmospheric Administration’s National Marine Fisheries Service (NMFS), depending on the species that may be affected. Section 7 (a)(1) further directs federal agencies to use their existing authorities to further the purposes of the Act, aid in recovering listed species, and to address existing and potential conservation issues with regards to preserving, enhancing, and restoring important habitat types (USFWS 1998).

The proposed action, as described in this BA, entails upgrading the existing placement network and operations to meet current and projected dredged material placement needs for the next five years (2014 through the 2018 dredging season). This BA describes the potential adverse and beneficial effects to SHLA and its critical habitat in the lower Columbia River. The SHLA was listed as threatened and had critical habitat designated under the ESA on 3 October 2013.