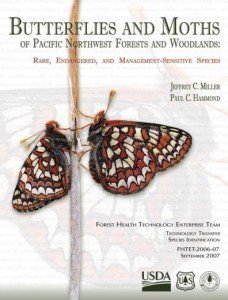 We present a compilation of 122 taxa of butterflies and moths that are of special interest in the Pacific Northwest, regarding forest management and conservation.  Our list is not a nomination slate for survey and monitor species; rather, it is an assemblage of species that should be considered as premier taxa for assessment of their current status and as candidates for long-term measures of populations for interests directed toward managing forests for biodiversity, and for comparing management/conservation policies.

The list of butterflies and moths is dominated by species and subspecies that are uncommon or rare, but we have included species that are widely distributed and associated with particular plant communities of special interest in the Pacific Northwest, including oak woodlands, alpine meadows, sand dunes, and wetlands.  We present at least one photo of an adult for each taxon.  More often than not we provide additional images of both sexes, and sometimes compare the dorsal wing surface to the ventral wing surface to serve as an aid in identification.  Also, for each species we offer a short statement about identification, ecology, sensitivity issues, and population assessment. For a few of the species we present an image of the caterpillar.  Unfortunately, many of the uncommon and rare species in the Pacific Northwest have no been photographed. In fact, the caterpillar and its foodplant are not known for some of the species.

It is our hope that this book will stimulate studies into the ecology of these species and provide a stimulus for conservation efforts to keep them from qualifying for inclusion on the Federal Endangered Species List.