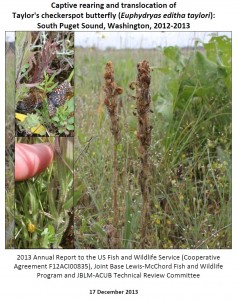 In 2012, two new sites in South Puget Sound were selected for reintroduction of Taylor’s checkerspot: Pacemaker (PCM) and Glacial Heritage Preserve (GHP). Scatter Creek South (SCS; initiated in 2007) was used as a second release site in 2013 in place of Pacemaker due to restricted access. Range 50 (R50; initiated in 2009) received three sequential releases of Taylor’s checkerspot; monitoring continues there and at Pacemaker. An initial assessment of host plant abundance and percent cover of vegetation functional groups for release sites used in 2011 and 2012 suggests that all reintroduction sites appear comparable to occupied plots at Range 76 (R76; extant site), although host plant quantities at GHP in 2012 may have been somewhat lower than desired. A second captive-rearing facility, Mission Creek Corrections Center for Women, began rearing Taylor’s checkerspot in 2012 as part of the Sustainable Prisons Project, operated by The Evergreen State College. As of Spring 2013, Mission Creek had reared all life stages of Taylor’s checkerspot and successfully mated animals in captivity. As in previous years, most mortality in captivity occurred prior to 3rd instar (Linders 2011b, 2012b), with survival during all remaining stages in the 90th percentiles; this was true for both the Oregon Zoo and Mission Creek. In total 6,589 postdiapause larvae were released on 1 and 4 March 2013. On 19 May 2013, 107 adults were released at GHP to supplement that population. We used distance sampling to quantify daily population density, daily population size, and to illustrate the distribution of adults at the release sites and three other sites, PCM, R76 and R50. In all, 7,397 records were generated across the five sites in 2013, with a total of 3,064 checkerspots counted. This is one third of the number of checkerspots counted during the 2012 flight season. Checkerspots were present throughout the sampling areas at both R50 and R76, whereas distributions at SCS, and GHP tracked the areas of release more closely. Adult counts were lower than expected based on postdiapause larval surveys and were also reduced on sites where no releases occurred. More work is needed to associate weather data and characteristics of flight season length, timing and stage-specific Taylor’s checkerspot abundance, however monitoring of both postdiapause and adult stages is helpful in clarifying this relationship. Long-term monitoring and population goals were developed in fall 2012. Based on those criteria, R50 far exceeded the target of 250 adults on a single day on the first year in which the population was based solely on reproduction, with a peak single day abundance estimate of 2,058 adults (range 1,467-2,886) in 2012. Raw counts for 2013 (Table 16) suggest abundance estimates will also exceed the target for 2013. In addition adults were distributed across the nearly the entire 22-ha monitoring area in both 2012 and 2013. Baseline standards will need to be met for five consecutive years based solely on reproduction in the field to meet the actual threshold established for success.