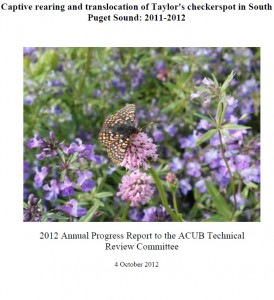 In 2012, we selected two new sites, Pacemaker (PCM) and Glacial Heritage Preserve (GHP), for reintroduction from a suite of historic and potential sites within the known range of Taylor’s checkerspot in South Puget Sound. Two sites, Scatter Creek South (SCS; initiated in 2007), and Range 50 (R50; initiated in 2009) have received multiple sequential releases of Taylor’s checkerspot. An initial assessment of host plant abundance and percent cover of vegetation functional groups suggests that all reintroduction sites appear comparable to occupied plots at Range 76 (R76; extant site), although host plant quantities at GHP may be lower than desired. A second captive-rearing facility, Mission Creek Corrections Center for Women, began rearing Taylor’s checkerspot in 2012 as part of the Sustainable Prisons Project, operated by The Evergreen State College. As in 2011, most mortality at the Oregon Zoo occurred prior to 2nd instar (Linders 2011b), with survival during all remaining stages in the 90th percentiles. Mission Creek, which began rearing checkerspots at the postdiapause stage in 2012, was equally successful, with 90.2 percent (92 of 102) of postdiapause larvae pupating; all of these survived to become breeding adults. The high degree of success enjoyed across captive rearing institutions and years is encouraging, and suggests improvements are best focused on increasing copulation rates and survival of 2nd and 3rd diapause larvae. In total 2,540 postdiapause larvae were released on 7-8 March 2012. Final dispensation of larvae was altered to include only PCM and GHP when access to R50 was restricted. On 25 May 2012, 133 adults were released at SCS to supplement that population. Post-release monitoring of postdiapause larvae indicated that they were readily observed in most plots at both PCM and GHP until they entered the pupal stage in early April. We used distance sampling to quantify daily population density, daily population size, and to illustrate the distribution of adults at the release sites and three other sites, SCS, R76 and R50. In all, 13,724 records were generated across the five sites sampled in 2012, with a total of 9,409 checkerspots counted. Checkerspots were well distributed and present in good numbers throughout the sampling areas at both R76 and R50, whereas distributions at SCS, PCM and GHP tracked the release areas more closely, with numbers lower than expected based on observations of postdiapause larvae. Cold wet conditions during the pupal stage are believed to have delayed the flight season, reduced its overall length and impacted numbers of adults at all sites. Long-term monitoring will measure progress toward population establishment 1) during the five-year reintroduction period, and 2) after the five-year reintroduction period is complete; several strategies are being considered. This report summarizes captive-rearing work conducted in May 2011-May 2012, and reintroduction work and data analyses from July 2011-July 2012.