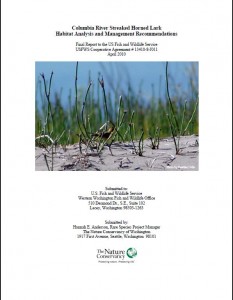 The Streaked Horned Lark (Erimophila alpestris strigata) is a rare subspecies of the horned lark that occurs on tree- and shrub-less landscapes in the Pacific Northwest. The Streaked Horned Lark is a conservation priority and is vulnerable to extinction. The subspecies carries several political designations that describe its conservation status. It is a federal candidate for listing under the Endangered Species Act, is considered Endangered by the State of Washington, is designated a Sensitive Species by the State of Oregon, and is Red-listed in British Columbia. Genetic data indicate that the Streaked Horned Lark is genetically unique, isolated, and has little genetic diversity (Drovetski et al. 2005). In addition, the breeding range of the Lark has contracted over time; it no longer breeds in the northern Puget trough (San Juan Islands and other coastal areas north of Tacoma), southern British Columbia, along the Washington Coast north of Grays Harbor, and in the Rogue River Valley (Rogers 2000, Beauchesne and Cooper 2003, Stinson 2005). Streaked Horned Larks use the islands of the lower Columbia River for breeding (Pearson and Hopey 2005a). The birds at these sites are some of the most productive throughout the range of the species, having higher reproductive success than at other breeding sites in Washington (Pearson and Hopey 2005a). To deepen and maintain the depth of the Columbia River shipping channel, The US Army Corps of Engineers (USACE) removes sand from the bottom of the navigation channel and deposits it onto these islands that are primarily publicly owned. In addition, Larks use these dredge material islands as over-wintering sites suggesting that they are important winter habitat (Pearson et al 2005b).

We determined that there are approximately 100 acres or just over 6% of the landscape on these islands in suitable condition for streaked horned larks in any given year. The largest proportion of habitat on these sites is in the Really Unsuitable category. Maintaining at least 100 acres in suitable condition and increasing suitable habitat available for prospecting larks is a priority action for conservation of this population. This can be achieved by placing dredge material in areas that are identified as unsuitable. Characteristics of unsuitable habitat include dense moss cover, little open ground or bare sand, dense concentrations of large grasses or shrubs, and trees. The maps depicting 2008 vegetation (figures 19, 21, 23, 25, 27, 29, 31, 33) or the suitability maps (figures 35-41) can help direct where deposition should occur in the future.