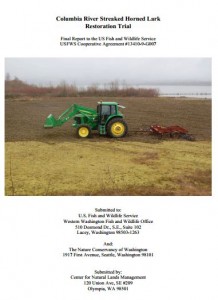 The streaked horned lark (Eremophila alpestris strigata), a subspecies of the horned lark, is considered rare in every region of its historic range (Figure 1). The species is red-listed in British Columbia where it is thought to be extirpated, Washington State lists the species as endangered and it is considered a sensitive species in Oregon. The streaked horned lark (lark or STHL) is a Federal Candidate for listing under the Federal Endangered Species Act (ESA), currently under status review. Genetic data indicate the subspecies is genetically unique, isolated, and has little genetic diversity (Drovetski et. al. 2005). Recent breeding population estimates suggest there are 1170-1610 birds in existence (Altman 2011). The species occurs on large treeless expanses with short and sparse vegetation. These birds use a variety of habitat types and sites that meet those criteria, including coastal sites and lowland prairie in Washington, agricultural land in Oregon, and airports throughout their current range.

STHL use the dredge-material islands of the lower Columbia River for breeding and wintering. These occupied sites are important as a geographic link between the occupied sites to the north, west, and south with documented movement between the island sites and other regions throughout their range (Pearson et al. 2008). The sites are also important as productive breeding sites, having higher reproductive success than sites in the Puget Lowlands (Pearson and Hopey 2005). The islands are also used by the US Army Corps of Engineers (USACE) in their role to ensure the ship navigation channel is maintained in the lower Columbia River. The upland deposition of dredge material, as well as beach nourishment actions, can provide a great benefit to STHL. The removal and deposition of this material not only maintains the navigation channel, its placement literally covers overgrown vegetation with bare sand creating the open structure and sparse vegetation habitat type that is preferred by STHL.

We aimed to test a technique to create early successional habitat where dredge placement was not planned to occur. We set out to understand the vegetation and lark response to tilling manipulations. We asked three primary questions: 1) Does tilling create lark habitat? 3) Does the level of tilling effort matter? 4) Will larks use restored areas? In addition to the restoration trial, we aimed to document sites occupied by STHL and the areas they were using in order to inform the USACE dredge material deposition actions and minimize conflict between larks and dredging.