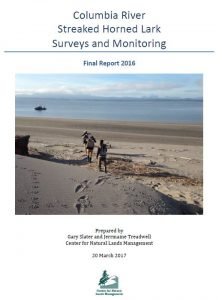 The Center for Natural Lands Management (CNLM) has been monitoring streaked horned larks and studying their ecology in collaboration with numerous partners, including the U.S. Army Corp of Engineers (USACE), on deposition placement sites in the lower Columbia River since 2010. Although periodic placement of dredged materials provide suitable habitat for larks, deposition islands appear to be suitable for a limited period, apparently between 2 to 3 and 7 to 8 years after creation. Understanding where larks occur and their abundance remains key to minimizing impacts from deposition actions as well as maximizing the habitat creation benefits of dredged material placement.

In 2016, CNLM continued to help USACE achieve goals as part of their consultation with U.S. Fish and Wildlife Service (USFWS) regarding Columbia River channel maintenance activities and a range of potential effects to SHLA.  Specifically, we conducted three primary tasks: 1) assess lark occupancy and abundance at 21 depositions sites in the lower Columbia River Network; 2) conduct territory mapping at two deposition islands to better understand colonization by larks at sites with known deposition histories; and 3) recommend methods to refine the current habitat suitability model for larks, improving its predictability and ability to guide future deposition placement on the Columbia River islands.

Although the maximum count of larks decreased for the second year, the maximum count of males increased, yielding an annual Network-wide population estimate of 64 breeding pairs, substantially above 52 pairs, which is the USFWS benchmark for take authorization.  One additional positive result included the detection of larks on four islands that recently had been unoccupied.  Survey results from occupied sites indicate that the bulk of the population resides on a handful of large deposition islands, emphasizing the importance of long-term management at these sites.  With our continued territory mapping project we gained more information about how larks recolonize deposition islands during the first two years following deposition or site preparation, and this information will be helpful in refining habitat suitability models.