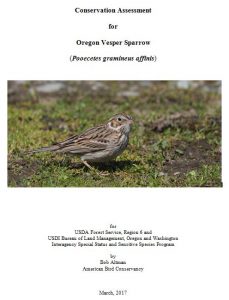 Oregon Vesper Sparrow is considered highly imperiled and of great conservation concern by all federal, provincial, and state agencies and non-governmental natural resource entities within its range. It is currently Sensitive in Oregon and Strategic in Washington.  It is Endangered in British Columbia, and extirpated as a breeding species in California. Continentally, it is one of 22 subspecies recognized as a “distinct population of high conservation concern and extremely high vulnerability.”

Oregon Vesper Sparrow has a restricted breeding range that includes southwestern British Columbia, western Washington and Oregon, and northwestern California. It is migratory, and overwinters in California west of the Sierra Nevada Mountains and south of San Francisco Bay, and historically into northwestern Baja California, Mexico.  Within the breeding range, it is restricted to grassland and savannah habitat types in lowland valleys and foothills, except for the Klamath Mountains ecoregion where it occurs in montane meadows. Within these habitat types, breeding habitat conditions can be generally characterized as moderately short and patchy grass and forb cover with some bare ground, low to moderate shrub or tall forb cover, and low tree cover. They typically avoid mesic areas or sites with tall, dense herbaceous vegetation.

The primary range-wide threats to Oregon Vesper Sparrow are continuing loss and degradation of grassland and savannah habitats (e.g., development and land conversion to non-suitable agricultural habitat; encroachment of invasive shrubs, trees, and tall, dense exotic grasses); negative impacts of land use/management on nesting birds (e.g., type, degree, and timing of activities such as mowing, habitat restoration, overgrazing, military training, recreation); and several factors related to small, isolated, and declining populations (e.g., genetic variability, recruitment/dispersal, stochastic events). All these threats are exacerbated by the predominance of populations on private lands (approximately 80%). On BLM lands in montane meadows in the Klamath Mountains, the primary threats are encroachment of woody vegetation from the edges of the meadows that reduces habitat area and suitability, and grazing that exceeds the parameters of habitat suitability, especially those meadows where ownership is shared with and/or leased to private landowners.

The population status of Oregon Vesper Sparrow warrants a sense of urgency for all appropriate management and conservation actions. Highest priorities are to protect sites where the persistence of a population is threatened, and to stabilize and/or expand existing populations. The most important locations for habitat management and restoration are within and near existing populations, especially if those are determined to be source populations, to maximize the likelihood of recruitment. The prescription for desired habitat conditions includes patches >20 acres (8 hectares), moderate forb cover (>15%) and bare ground (5-15%), low shrub and tree cover (<15% and <10%, respectively), and herbaceous cover that is structurally and compositionally diverse.

The highest priority research need for Oregon Vesper Sparrow is to understand the cause(s) of local and range-wide population declines and extirpations. Lack of this knowledge precludes identification and implementation of appropriate conservation actions to address population status. The highest priority monitoring needs are annual monitoring of existing small populations to track their status and direct where emergency actions may be necessary to prevent local extirpations, and effectiveness monitoring to determine their response to habitat restoration and management. There are a few inventory needs to fill gaps in the range-wide inventory in 2013. There is a need to confirm the spatial boundaries of subspeciation though genetic analyses, especially the population in the Rogue Basin of the Klamath Mountains ecoregion.