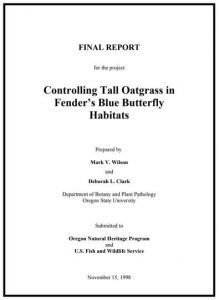 1. We report final results from a five-year field experiment evaluating the effects of different mowing regimes on groups of native and non-native grasses and forbs at a degraded prairie at Baskett Slough National Wildlife Refuge, dominated by Arrhenatherum elatius (tall oatgrass). Mowing treatments differed application time, mowing height, and removal of cut material. Treatments started in 1994 and continued through 1998.

2. Although some treatment effects on plant cover became evident in the second year after initial treatments, differences among treatment resolved only by the third and fourth years. This delay in response reinforces the need for long-term studies. In 1998, after four years of treatment, all treatments had lower average cover of Arrhenatherum than in controls, with statistically significant reduction in three of the treatments (mowing in late spring mowing in early summer, and double mowing). Treatments increased the cover of the native perennial grass Danthonia californica, with late spring mowing having the strongest effect. The increase in Danthonia was due largely to the reduction in Arrhenatherum cover. Late spring mowing also caused a significant increase in the cover of the native bunchgrass Festuca idahoensis var. roemeri.

4. Changes in flowering of Arrhenatherum and Danthonia did not translate into measurable changes in seedling numbers with treatment. Nearly all seedlings observed were nonnative annual grasses and forbs.

5. Overall performance at meeting management objectives was determined by the use of an Effectiveness Index. This index accounted for a treatment’s ability to reduce the target pest plant Arrhenatherum, reduce other non-native plants, and increase native plants.
Treatment 1 (mowing in late spring), was particularly effective (EI = 1.14). Treatment 5 (mowing in early summer, with removal of cut material) and the control (no manipulation) were least effective (EI = -0.44).

6. Several mowing treatments were effective at fulfilling the management objectives of reducing non-native cover and encouraging native cover. We recommend Treatment 1 (mowing at 10 cm – 15 cm in late spring) as the as the best overall treatment. In areas with Kincaid’s lupine and Fender’s blue butterfly, however, mowing should be delayed until July, after the flowering and flight seasons. Delayed mowing, as in Treatment 2 (mowing at 10 cm – 15 cm in early summer) and Treatment 3 (mowing at 10 cm – 15 cm in early fall), had the next best overall performance. We recommend that removing cut material (Treatment 5) and double mowing (Treatment 7) be avoided in degraded prairies, because of their potential for promoting annual non-native plants.