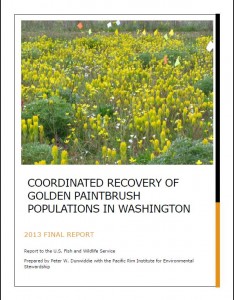 The USFWS provided funding to support the recovery of golden paintbrush populations in western Washington from 2012-2013. The project had four primary objectives, including a) Increasing the availability of golden paintbrush seed for recovery activities, a) Growout and outplanting of plugs and seed at augmentation and new recovery sites, c) Implementation of priority management activities at specific sites to enhance suitability for golden paintbrush, d) Monitoring of the success of paintbrush seeding and outplanting efforts at sites in north and south Puget Sound to document progress towards meeting recovery goals, and e) Explore potential sites for establishing new populations.

Nursery beds producing golden paintbrush seed were expanded in 2013 by about 1/3, and 9,000 new plugs were started to expand production even further in 2014. Over 500 grams of paintbrush seed were harvested in 2012, and sown in 5 South Sound sites. With the increased nursery beds, over 900 grams were produced in 2013. Greenhouse-grown plugs were outplanted in fall, 2012 in efforts to establish new populations at multiple sites in North Puget Sound, including several locations on Lopez Island, American Camp (NPS) and two other sites on San Juan Island, and on Protection Island (USFWS). Management efforts continue to enhance the suitability of habitat at extant, wild populations, as well as at many newly-established recovery populations in both North and South Puget Sound. Activities include burning to prepare substrates for seeding, herbiciding to control invasive
species, and fencing in some locations to reduce deer grazing.

Monitoring at most sites now consists primarily of recording the number of flowering plants, which provides the basis for tracking progress towards reaching restoration goals. In North Puget Sound, two new recovery sites (Smith Prairie and Ebey’s Landing) already exceed the 1000+ plant recovery threshold, and can be expected to become increasingly viable with future management. Extant populations at Ft. Casey State Park and Naas NAP both have become much more robust as a result of extensive restoration work and population augmentation. First-year results from several new recovery sites in the San Juan Islands show promising golden paintbrush survival rates, and will be the focus of ongoing enhancement activity.

In South Puget Sound, golden paintbrush populations have been established at five sites, all of which are approaching or have exceeded the 1000+ plant recovery threshold. Two sites (Glacial Heritage and West Rocky) have met this goal in both 2012 and 2013, and thus show considerable promise for meeting the 5-year running average stipulated in the Federal Recovery Plan. Seeding (and some plugging) has been carried out annually at most sites, and is now resulting in significant establishment of flowering plants, with some regeneration from self-sown seed. Seeding in particular has helped to greatly expand the area occupied by these populations.