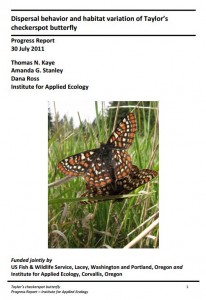 Taylor’s checkerspot is a Candidate for listing by USFWS.  It occurs in Washington, Oregon and British Columbia as scattered populations in upland prairie and bald habitats, many of which are in decline for unknown reasons.  Despite an extensive body of research on Edith’s checkerspot in general (Taylor’s is a subspecies of Edith’s), the reasons for the decline of Taylor’s populations are unknown, and the factors that control population growth and spread of this butterfly are poorly understood. Climate change has caused demonstrated range shifts on Edith’s checkerspot in California (Thomas et al. 2006).

This project is intended to provide information about the butterfly’s habitat and dispersal behavior to support management of existing populations, habitat connectivity, reserve design, and overall recovery.  Primary questions of interest to this project included:

To address these questions, this project addresses two project objectives, measurements of 1. dispersal behavior and 2. habitat characteristics.  To meet objective 1, dispersal behavior, we conducted observations at one population in Oregon and three in Washington.  We focused on two aspects of dispersal behavior, frequency of movement between habitat patches and responses to habitat edges.  For objective 2, habitat characteristics, we measured physical and biological habitat attributes at a range of sites in Oregon, Washington, and British Columbia (Table 1).  This report contains information on progress to date.