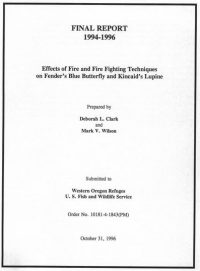 We report results from a field experiment evaluating the effectiveness of mowing, mowing and herbicides, and burning on woody plants, key native and non-native grasses and forbs, and the Fender’s blue butterfly. The goal was to find a technique that controlled woody pest plants without harming native species or promoting non-native species.