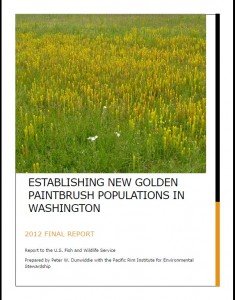 Systematic observations on extant populations of golden paintbrush (Castilleja levisecta) in Washington began in the 1990s (Wentworth 1994, Dunwiddie 1998). These early efforts included experimental burning at one site, Rocky Prairie, as well as detailed demographic and ecological studies that began to elucidate important factors in the management and restoration of this federally threatened species (Dunwiddie et al. 2001, Gamon et al. 2001). Specific actions directed at recovering this species began following the development of the federal Recovery Plan (USFWS 2000), and have continued with experimental introductions at several sites in South Puget Sound, Whidbey Island, and the San Juan Islands. These actions have been carried out with the assistance and cooperation of numerous colleagues, graduate students, and organizations (e.g., Swenerton 2003, Wayne 2004, Pearson and Dunwiddie 2006, Sprenger 2008), with extensive funding provided by the U.S. Fish and Wildlife service. Collectively, this work has helped to identify key factors in the biology and ecology of this species, understand critical elements that aid in the survival and enhancement of existing golden paintbrush populations, identify potential new sites that may be capable of supporting this species, and help establish new populations at sites that appear to offer the greatest restoration potential.

This report describes the recovery work that was accomplished under a grant awarded to the Pacific Rim Institute in the fall of 2009, which funded activities that were carried out in western Washington through the spring of 2012.