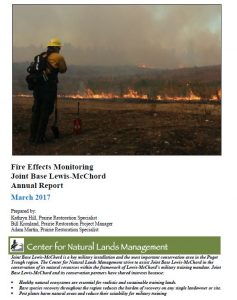 Prairies found on Joint Base Lewis McChord (JBLM) are among the largest and most intact within the Puget Trough ecoregion, and support populations of 3 federally listed species (streaked horned lark [Eremophila alpestris strigata], Taylor’s checkerspot [Euphydryas editha taylori], and Mazama pocket gopher [Thomomys mazama yelmensis, T. m. glacialis]). These prairies are also ideal for military training activities.  Prescribed fire is the foundation to prairie management on JBLM, and prudent management necessitates understanding the variability of fire effects across weather and fuel conditions, as well as fire’s role in shaping prairie communities. Our objectives are to quantify burn-day fuel, soil, and weather conditions, build robust models describing their influence on temperatures and burn severity, and to relate these to post-burn community composition, vegetation structure, and Mazama pocket gopher occupancy over time.  We have collected data over two burn seasons – 2015 was a drought year, while 2016 had a more ‘normal’ precipitation pattern.

Air temperature and thatch depth were the main drivers of surface and subsurface soil temperatures, respectively, with higher ambient air temperatures resulting in increased surface burn temperatures and deeper thatch layers resulting in decreased subsoil temperatures.  Minimal thatch layers are usually prevalent in areas that have burned recently, although other factors can also contribute to absence of thatch (e.g., low grass cover). The highest subsoil heat dose that we observed each year was in a unit that had just burned the previous year; the second highest heat dose each year was in a unit that had burned only two years prior.  Soil moisture was the strongest factor impacting burn severity. Burns producing hotter surface temperatures resulted in greater cover of exotic perennial forbs (EPF) and somewhat lower cover of natives the following growing season, when compared to cooler burns.  Vegetation height structure is an important component of habitat for many wildlife species, and was also influenced by hot burn temperatures. Average height was lower and overall height structure was less heterogeneous after hotter burns, although these relationships were somewhat weak and most of the variance in height structure was explained by prairie and pre-burn height.  We observed a fair amount of seasonal plasticity in gopher occupancy on the Rainier Training Area prairies. Factors that drove this variability remain unclear, but the role of prescribed fire seems to have been minimal.  Thus, it may be possible that burn return intervals could be extended beyond 2 – 3 years without significant negative impact on gopher occupancy, particularly in extreme years when short-term seasonal declines from burning should be minimized.