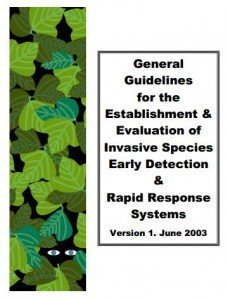 Preventing the introduction of invasive species is the first line of defense against invasions. However, even the best prevention efforts will not stop all invasive species introductions. Early detection and rapid response (ED&RR) efforts increase the likelihood that invasions will be addressed successfully while populations are still localized and population levels are not beyond that which can be contained and eradicated. Once populations are widely established, all that might be possible is the partial mitigation of negative impacts. In addition, the costs associated with ED&RR efforts are typically far less than those of long-term invasive species management programs.

The Council approved these guidelines in June 2003 to provide information to those who wish to establish or evaluate ED&RR systems for invasive species. They are based on the work of the federal and non-federal members of the ED&RR Subcommittee (see appendix 4) of the Invasive Species Advisory Committee (ISAC) of the Council. The guidelines contain information from a from a wide range of subject matter experts, people with direct experience in ED&RR efforts, and stakeholders that included members of the ISAC and representatives of Council member agencies. Information was drawn from documents that analyze existing or proposed systems including but not limited to: work by the Federal Interagency Committee for the Management of Noxious and Exotic Weeds (FICMNEW), a report by Jim Worrall of the U.S. Forest Service, the work of the Western Regional Panel of the Aquatic Nuisance Species Task Force, the definition of “rapid response” developed by the Council, and information on ED&RR systems from New Zealand and Australia. It is anticipated that these guidelines (Version 1) will be revised as science, technology, and experience with systems and species advance.