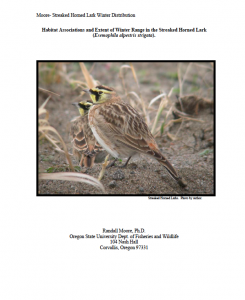 One of the greatest information gaps concerning the distribution of this subspecies is its winter range. The southern Puget Trough, Lower Columbia River Valley, Willamette Valley, southern Washington coast, and the valleys of northern California were all historically reported to host varying numbers of strigata in winter [for a very thorough review of historical reports of strigata’s distribution, see Stinson (2005)]. The bulk of these reports, however, were made no later than the early 1940’s when strigata was presumably much more common than it is today, and when less was known about subspecific plumage variation in the horned lark complex. Following the beginning of strigata’s breeding range retraction sometime in the early to mid-twentieth century, nothing has been published of its winter range. That which was published prior to that time is replete with speculation and probable misidentification (Behle 1942), so that prior to 2003, there was very little reliable knowledge of the non-breeding habits of this subspecies, nor whether strigata is even visually separable from other races in winter.

Recognizing that distribution in the non-breeding season can be as important to conservation efforts as that during breeding, an effort was begun in 2003-2004 to delineate strigata’s geographical distribution during the winter months (defined as November through February for the purposes of the study). The study was continued in the winter of 2004-2005, and completed during the winter of 2006-2007 with surveys of suggested historical wintering sites in southern Oregon and northern California. Although a summary of the three winter seasons will be presented, it is the latter field season (2006-2007) that will be the main focus of this report.