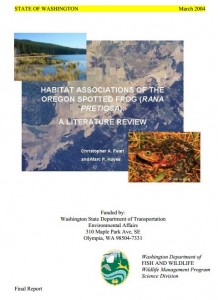 The Oregon spotted frog (OSF; Rana pretiosa) is presumed extirpated from ca. 70% of historic habitat in the Pacific Northwest. Successful conservation of the species will likely depend on a more detailed understanding of OSF habitat associations and life history requirements that drive those use patterns. Among the more prominent factors limiting knowledge of OSF habitat requirements has been an incomplete knowledge of the species’ life history, extirpations asymmetrically concentrated in the lowland Pacific Northwest, and hydrological alterations in both unoccupied historic sites and sites where OSF is still present.

Data from historic and occupied OSF sites suggest a strong relationship between upper elevation limit and latitude, such that OSF at their northern range limits are unlikely to occur above 200 m. Oregon spotted frogs are generally associated with wetland complexes > 4 ha in size with extensive emergent marsh coverage that warms substantially during seasons when OSF are active at the surface. The expanse of inundation in wetlands where OSF are extant often varies greatly between spring and fall, but sites always include some permanent water juxtaposed to seasonally inundated habitat. Wetland complexes that include diverse hydrological regimes (based on National Wetland Inventory classification) may also be favored, and this pattern may be indicative of juxtaposed seasonal use habitats. Occupied OSF sites that are larger in spatial coverage tend to have larger populations. Current understanding of OSF demographic patterns suggests the species demonstrates more rapid population turnover than other ranid frogs in the Pacific Northwest, and larger populations may be less susceptible to high predation and stochastic events. Many remaining OSF populations appear isolated from the nearest known OSF site by extensive uplands, but how site isolation relates to population persistence is unclear.

Field observations and recent telemetry data suggest OSF utilize different wetland microhabitats for breeding, the non-breeding active season (summer and portions of spring and fall), and overwintering. Breeding sites are generally associated with seasonally flooded, shallowly sloping benches that are vegetated with the previous year’s emergent vegetation and are relatively unshaded. Attributes of OSF oviposition behavior (apparently locally philopatric, communal, and selecting for shallow water that is likely to decline as spring progresses) may contribute to relatively frequent stranding of egg masses and substantial egg mortality. Limited data suggest that OSF adults may move little during the non-breeding active season, and may prefer microhabitats of moderate vegetation density that are near aquatic refuges. Oregon spotted frogs make at least occasional underwater movements during winter, and may make extensive use of streams or springs at higher elevation sites. Movements during winter may be associated with dissolved oxygen gradients, but this needs further corroboration. More broadly, OSF movements between seasonal use areas appear to be more extensive than movements within a seasonal use area, and appear focused on aquatic connections.

We recommend additional research in the following areas of OSF habitat associations: 1) Minimum site size and habitat complexity necessary to support an OSF population even when isolated; 2) Habitat characteristics and types of corridors that may reduce isolation between extant OSF breeding sites; 3) Overwintering habitat use and quality (especially for selected water quality parameters) at low and high elevation sites; 4) Attributes of OSF movements and utilized pathways between seasonal use areas; 5) Importance of vegetation change (both invasion by non-native species such as reed canarygrass and encroachment by woody vegetation in fire-suppressed areas) in affecting habitat suitability, and OSF response to vegetation management alternatives; 6) OSF habitat responses to management practices such as livestock grazing and hydrological alterations (anthropogenic, beaver and others); and 7) Habitat attributes that relate to coexistence or increased risk of extirpation when OSF occur with non-native fish and bullfrogs.

Go to "Habitat Associations of the Oregon Spotted Frog (Rana Pretiosa): A Literature Review" on Washington Department of Fish and Wildlife (WDFW)