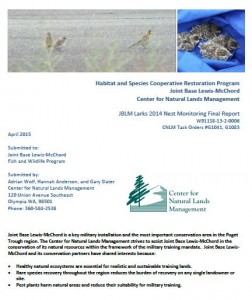 The Streaked Horned Lark (Eremophila alpestris strigata) is a genetically distinct subspecies (one of 24 subspecies) of the Horned Lark that historically ranged from the Rogue and Willamette Valleys of Oregon, north to the Georgia Basin of British Columbia and coastal beaches in Washington (Drovetski et al. 2005, Stinson 2005). The current distribution of breeding larks has been reduced to the Willamette Valley, dredged material islands of the Columbia River, coastal beaches of Washington, and South Puget Sound grasslands. In October 2013, the United States Fish and Wildlife Service listed the Streaked Horned Lark as threatened under the Federal Endangered Species Act (50 CFR part 17).

The majority of Streaked Horned Larks remaining in south Puget Sound occur at Joint Base Lewis-McChord (JBLM), making the tracking and enhancement of this important population and the improvement of habitat at occupied and unoccupied sites critical to its persistence in the region. Modeling has indicated larks may be declining by up to 40% per year and that actions to increase all three vital rates (fecundity, adult and juvenile survival) are necessary to stabilize the population (Camfield et al. 2011). In 2014, we implemented several actions to support the Streaked Horned Lark population including occupied site monitoring (abundance and nest monitoring), communication with site managers, population enhancement (genetic rescue), habitat management, and research to understand juvenile survivorship.

The goal of our work is to conduct conservation actions on JBLM aimed at stabilizing or reversing the observed decline in Streaked Horned Lark populations. We conducted work at five occupied sites on Joint Base Lewis-McChord in the Puget Lowlands of Washington State. The objectives of our work were five-fold: