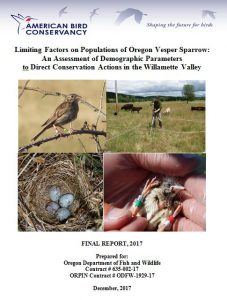 Oregon Vesper Sparrow is one of the most imperiled birds in the Pacific Northwest, and has been designated as a bird of high conservation concern and vulnerability by all natural resources entities within its breeding and wintering ranges. A recent range-wide inventory in conjunction with an extensive assessment of anecdotal data indicates that the remaining population is less than 3,000 birds.

This report summarizes results from the first year of a three-year project to document potential limiting factors on Oregon Vesper Sparrow populations. Project design emphasized an examination of multiple parameters within three demographic vital rates (i.e., productivity, survivorship, dispersal/recruitment), and among several habitat types and conditions at various scales and contexts. The principal methods were nest monitoring for metrics of productivity, and color-banding of birds for metrics of survivorship and dispersal/recruitment.

Annual survival of birds banded at Bald Hill Farm in 2016 was 46%, including 52% for adults and 35% for hatch-year birds. Adult survival was similar between males (57%) and females (50%), but substantially higher for birds banded as fledglings (83%) rather than nestlings (9%). Among returning birds, 91% were detected at the same site where they were banded. This included 93% of adults and 83% of birds banded as hatch-year. There were two birds documented to return away from their banding site. They were located at two different sites approximately 10 and 12 miles north of Bald Hill Farm.

Post-fledging survival prior to dispersal was 70% at the one site where this was monitored. Most of the final re-sightings (80%) were in the last two weeks of August, and most of those (86%) were birds over two months old. There was documented survival from all six successful nests, with never more than one bird not detected from any nest. During the 2017 breeding season, 128 birds were color-banded at seven sites, including 79 adults (69 males, 7 females, and 3 unknown) and 49 hatch-year birds (34 nestlings and 15 fledglings).

There were 21 nests monitored at five sites. Ten nests were successful (48%) and 11 failed (52%). The Mayfield estimate of nest success was 15.6%, with a daily survival probability of 0.9249. There were 3.3 young fledged/successful nest and 1.6 young fledged/active nest. Nest failure occurred almost exclusively at the egg stage (91%). Nest predation accounted for 55% of nest failures. There was a 77% hatching rate of eggs, and 44% of the nests had at least one egg unhatched, including one nest with all unhatched eggs.

Habitat assessment was conducted at 17 of the 21 nests. Successful nests were much closer to shrubs and trees and farther from non-habitat edges than failed nests. The other most noteworthy results included higher percent bare ground and lower moss/lichen and thatch/litter at nests over random points, higher basal vegetation at successful over failed nests, and greater cover of Agrostis stolonifera and Bromis mollis and less cover of Festuca arundinacea at successful nests.

Download "Limiting Factors on Populations of Oregon Vesper Sparrow: An Assessment of Demographic Parameters to Direct Conservation Actions in the Willamette Valley" [docx]