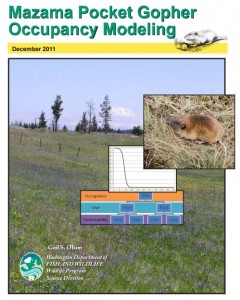 PART I: Occupancy Modeling for the Mazama Pocket Gopher

This study used state-of-the-art methods to model site occupancy, within-site use, and detection probabilities of Mazama pocket gophers in Thurston and Pierce Counties. Data on pocket gopher presence (using mounds as indicators of presence) and a suite of habitat variables were collected from surveys of 41 sites in Spring 2008, and repeated on 40 sites in Fall 2008. Most sites (n=33) were on public lands including 24 sites on Joint Base Lewis McChord. Sites with low levels of Scots broom cover, shorter average vegetation, and soils containing fewer rock fragments (especially those 5.0-10.cm in size) tended to have higher occupancy probabilities. Within occupied sites, plot use was higher when broom density was low, fall vegetation was taller and the soil was of a sandy-loam type. Detection probabilities were most strongly influenced by time of year, with surveys in September and October having 6 times greater detectability than Mar-May, and about double that of November surveys.

PART II: The Use of Mound Surveys to Index Pocket Gopher Abundance

This study investigated the relationship between pocket gopher mounds and abundance at two sites in Thurston County: the Olympia Airport and Wolf Haven International. Replicate square plots that were 25m on each side were established at each site in Spring and Fall 2008. All pocket gopher mounds located in each plot were mapped and subsequently live-trapped to determine their association with individual gophers. Overall, there was a positive relationship between the number of mounds and number of gophers, but the Airport had about 3 times more mounds per gopher than did Wolf Haven in both seasons. Both sites had about the same number of mounds per gophers across seasons within sites. An evaluation of the general utility of mound surveys as an index to pocket gopher abundance (including results from this study and those from other published studies) concluded that establishing a site-specific relationship between the two metrics is necessary. This is likely practical only on the most important sites for which the effort required to simultaneously estimate abundance and conduct mound counts is worthwhile. Otherwise, mound surveys should be restricted to use in establishing pocket gopher presence.