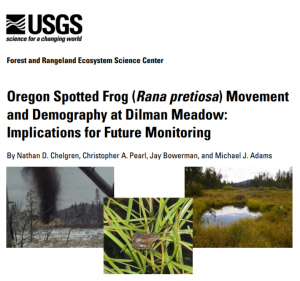 The Oregon spotted frog (Rana pretiosa) is a highly aquatic frog that has been extirpated from a large portion of its historic range in the Pacific Northwest, and remaining populations are reduced and isolated (Hayes 1997, Pearl and Hayes 2005). Loss and alteration of marsh habitat, predation and competition from exotic fish and bullfrogs, and degraded water quality from agriculture and livestock grazing are implicated in their decline (Hayes 1997, Pearl and Hayes 2005).

In 2001, an interagency team translocated a population of frogs from a site that was to be eliminated by the renovation of the dam impounding Wickiup Reservoir, to newly created ponds at Dilman Meadow (121º 39’ 52” W, 43º 41’ 58” N), 2.5 km from the original site in central Oregon, USA. We monitored Oregon spotted frog demography and movements at Dilman Meadow for > 4 yr to assess the efficacy of these mitigation efforts, determine metrics for long-term monitoring, and inform future management at the site. More broadly, many aspects of Oregon spotted frog life history are poorly known, so understanding demography and movement patterns is likely to be useful in its conservation. Although wildlife translocations have been attempted extensively as conservation means, few such projects have been sufficiently monitored for demographic rates to understand the causes for the translocation’s success or failure (Dodd and Seigel 1991).

Our objective here is to document demographic and movement patterns in the population of Oregon spotted frog at Dilman Meadow so that this information will be available to guide management decisions.