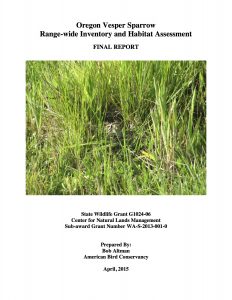 Oregon Vesper Sparrow (ORVS: Pooecetes gramineus affinis) is one of the most imperiled bird species in the Pacific Northwest, and is considered of high conservation concern by all natural resources entities within its range. Historically, it was a relatively common species throughout its range in western Oregon, Washington, and southwestern British Columbia (Altman 2011). Current knowledge from several databases, anecdotal reports, and avian community surveys indicate that the population of ORVS is likely <3,000 birds (Altman 2011), which is similar to Streaked Horned Lark, another endemic prairie subspecies that is currently listed as Threatened under the Federal Endangered Species Act (ESA). Data from the Breeding Bird Survey (BBS) indicates statistically significant declining trends range-wide of 2.97%/year (Sauer et al. 2012), and 5.9%/year in the Willamette Valley (Sauer et al. 2008). Further, a recent study at 544 point count stations throughout the Willamette Valley reported a 79% decline in ORVS detections between surveys conducted in 1996 and repeated in 2008 (Myers and Kreager 2010).

ORVS is a Bird of Conservation Concern for the U.S. Fish and Wildlife Service (USFWS 2008), and a Species of Greatest Conservation Need in both the Oregon and Washington State Wildlife Action Plans (ODFW 2005, WDFW 2005). It is a candidate for listing as Endangered or Threatened in Washington State (wdfw.wa.gov/conservation/endangered/status/SC/). On the ODFW Sensitive Species List, it is considered Sensitive-Critical, a subcategory which indicates “imperiled with extinction.” In British Columbia, it was listed as an Endangered Species in April 2006, and has probably been extirpated as a breeding species (S. Beauchesne pers. comm.). Lastly, ORVS is recognized continentally as a “distinct population of high conservation concern and extremely high vulnerability” in the 2014 State of the Birds Watch List report (Rosenberg et al. 2014).

There has been no range-wide systematic survey to determine the distribution and status of populations of ORVS. Management and restoration of its primary habitat, prairie and oak savannah, has been and continues to be a major emphasis throughout the Pacific Northwest. However, the opportunity to ensure that prairie-oak habitat restoration is being targeted to meet the needs of this imperiled bird species is thwarted by the lack of information on its distribution and habitat relationships, and strategic prioritization of desired conservation actions. Consequently, population, distribution, and habitat relationships data is needed to assess the current protection status for ORVS, strategize for its conservation, and implement actions to reduce the risk of further population reductions and potential ESA listing.