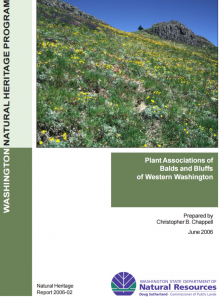 This report describes plant associations (plant community types) of existing vegetation found in specific habitats in lowland and mid-montane western Washington that have been little studied previously. The habitats covered by the report include dry-site balds (small openings on slopes within forested landscapes) dominated by herbaceous vegetation and/or dwarf-shrubs, as well as those portions of coastal bluffs dominated by herbaceous vegetation. These plant communities are significant for biodiversity conservation because within a very small relative area they host a diverse array of plant taxa that do not occur in most habitats of western Washington (a relatively high percentage of the total flora for the region in a very small area), and because some animal species, especially butterflies, of particular concern are confined to these or closely similar habitats.

The report defines these ecological systems in relation to vegetation, physical environment, and natural disturbance processes. They appear to be some of the driest habitats in western Washington that are dominated by vascular plants. Balds habitats are characterized by their low-growing vegetation, relatively shallow soils, relatively dry topographic positions, and relatively sunny aspects in comparison to the full range of physical environments in western Washington. These sites can be seasonally moist or wet early in the growing season, but if so, then they dry out to an extreme degree late in the growing season. Fire and other disturbances are important ecological processes in these habitats. Most balds appear to be environmentally marginal, at best, for the establishment of most trees due to extreme summer drought conditions. Extant balds appear to be much more resistant to invasion by trees and shrubs than western Washington prairies located on level terrain and deeper soils.