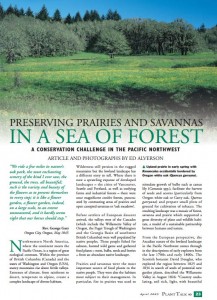 Northwestern North America, where the continent meets the Pacific Ocean, is a region of great ecological contrasts. Within the province of British Columbia (Canada) and the states of Washington and Oregon (USA), snowy mountains rise above fertile valleys. Extremes of climate, from rainforest to desert, temperate to alpine, create a complex landscape of diverse habitats.

Wilderness still persists in the rugged mountains but the lowland landscape has a different story to tell. Where there is now a sprawling expanse of developed landscapes – the cities of Vancouver, Seattle and Portland, as well as outlying farms and industrial forests – there were once magnificent conifer forests, punctuated by contrasting areas of prairies and open canopied savannas or ‘oak meadows’.

Before settlers of European descent arrived, the valleys west of the Cascades (which include the Willamette Valley of Oregon, the Puget Trough of Washington and the Georgia Basin of southwest British Columbia) were well populated by native peoples. These people fished for salmon, hunted wild game and gathered food plants – roots, bulbs, seeds and berries – from an abundant native landscape.

Prairies and savannas were the most important source of food plants to the native people. They were also the habitats
most subject to their management. In particular, fire in prairies was used to stimulate growth of bulbs such as camas lily (Camassia spp.), facilitate the harvest of seeds and acorns (particularly from Oregon white oak or Garry oak, Quercus
garryana) and prepare small plots of ground for cultivation of tobacco. The resulting landscape was a mosaic of forest,
savanna and prairie which supported a great diversity of plant and wildlife habitats, a model of a sustainable partnership between humans and nature.

Download "Preserving Prairies and Savannas in a Sea of Forest: A Conservation Challenge in the Pacific Northwest" [pdf]