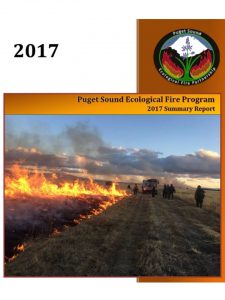 The 2017 burn season is most notable in five ways:

We started burning late-May at JBLM (focused on Ponderosa pine litter reduction) and made good progress on ACUB and JBLM sites up through the end of July. Just as our native prairie plants were becoming fully cured, a series of multi-day smoke incursions from the east side of the Cascades repeatedly shut down our operations. During the six weeks between August 1 and Sept 9 (normally our primary burn window), we were shut down due to bad air quality for three weeks. During that same time the wildfire burned 345 acres of Scatter Creek, which ended up redirecting already limited burn operation funds to do wildfire restoration. Smoke and fire danger sensitivities in the community led to further shutdowns for Thurston County burns until October 2nd, by which point, the fall rains were well underway. State and ACUB funding restrictions also impacted our ability to burn on Thurston County sites.

In spite of these challenges, we were able to complete many of our goals in South and North Sounds and sent crews to assist on several burns in Oregon (under a  new improved agreement). At JBLM, integration of Forestry and ITAM crews into our burn efforts was further improved, allowing us to take better advantage of our reduced burn window. Though we didn’t get much opportunity to utilize it, the DNR approval process for burning off-JBLM during the summer burn ban was greatly improved this year. Unfortunately, several priority Thurston County burn sites went unburned due to all the unusual challenges we faced. In total, we completed 2037 acres during 80 prescribed burns on seven different properties in Puget Sound. Though plans by Oregon burn partners to assist in Puget Sound were thwarted by weeks of bad air quality, our Puget prescribed fire crews were able to support them on 13 burns in Oregon, totaling 1442 acres.