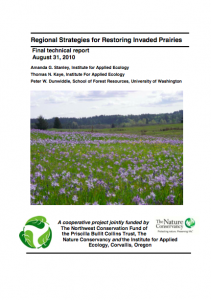 Background and approach: Invasive plants, especially non-native perennial grasses, are a critical threat to remnant prairies and oak savannas in the Pacific Northwest. We evaluated the effectiveness of restoration treatments designed to 1) reduce target exotic weeds with minimal non-target impacts and 2) increase native species diversity and abundance. In cooperation with numerous partners, the Institute for Applied Ecology and The Nature Conservancy conducted a 5-year study at 10 sites along a 500-km latitudinal gradient from the Willamette Valley, OR to Vancouver Island, BC. Our manager-recommended treatment combinations included the following components: summer and fall mowing, grass-specific and broad- spectrum herbicide, and fall burning. All treatment combinations were crossed with native seed addition. Each combination was created to target factors likely to limit restoration success, including extreme exotic grass cover, litter accumulation, and native seed limitation. Where possible, we also applied what appeared to be the most promising treatment combination over a large area (100 x 100 m) to assess the scalability of results. Results from small-scale studies may differ substantially when applied at large scales due to edge effects in small plots (e.g., seed inputs from untreated areas), community level effects (e.g., impacts from herbivores), or spatial heterogeneity.

Results: After 5 years, we found that the most disturbance-intensive treatment combination (sethoxydim, burning, and post-fire glyphosate) led to reduced abundance of exotic grasses and forbs without causing a decline in native species. Sethoxydim combined with fall mowing reduced exotic grasses and increased native plant abundance. In all cases, disturbance treatments reduced exotic cover to varying degrees but had no positive impact on native diversity; only seed addition increased native species richness. Results from the large treatment areas were complicated due to difficulties with treatment application and timing, but generally reflect the results from the small-scale experiments. Our results show that restoration of degraded grasslands is most successful when it employs a variety of strategies applied in combination over several years, and where the type, timing, and number of treatments are carefully chosen based on a thorough understanding of limiting conditions, species biology, and grassland ecology.

Management recommendations: As expected, we found there was no ‘silver bullet.’ While some treatment combinations led to large improvements in weed control and native diversity and abundance, the degree of success varied across sites. Where invasive grasses are the most pressing problem, we recommend the use of grass-specific herbicides as highly effective with minimal non-target effects on native forbs and some native grasses. Fire is a useful tool for preparing a site for seeding, but may need to be followed closely with a broad spectrum herbicide to control rapidly resprouting weeds. Careful timing of post-fire herbicide avoids later- sprouting natives. At all sites, we recommend seed addition to enhance native diversity and abundance, as our data show even relatively high quality sites show strong seed limitation. Mowing is ineffective at reducing weed abundance, and can negatively impact some natives depending on timing. While mowing did reduce thatch and increase light penetration, it did not increase bare soil leading to low seedling success. If fire is not an option, we recommend testing mowing in combination with treatments to reduce moss and increase bare soil.