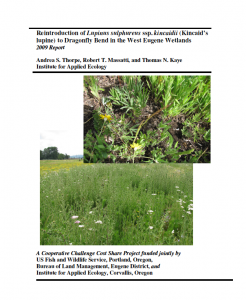 Kincaid’s lupine (Lupinus sulphureus ssp. kincaidii; Figure 1), a rare member of the legume family (Fabaceae), is listed by the U.S. Fish and Wildlife Service and Oregon Department of Agriculture as a threatened and endangered by the Washington Department of Natural Resources. This species is found in native prairie remnants in the Willamette Valley, southwestern Washington, and forest openings in Douglas County, Oregon. In the Willamette Valley, Kincaid’s lupine serves as the primary larval host plant for the endangered Fender’s blue butterfly, making conservation of the lupine a common strategy for the success of both species.

Only 57 sites are known to support Kincaid’s lupine and fewer than 20 of these are larger than 1 hectare (Wilson et al. 2003). Additionally, the majority of the sites are on privately held land, which is exempt from protections provided by state and federal listing, increasing the importance of management by state and federal agencies on public land.

The objective of this project was to introduce Kincaid’s lupine to Dragonfly Bend, a wetland mitigation site located in the West Eugene Wetlands, and managed by the City of Eugene and Eugene District Bureau of Land Management. This report summarizes the results of three years of reintroduction efforts at this site.