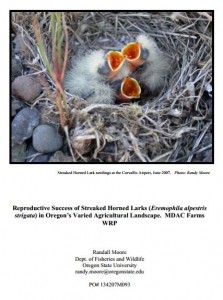 One of the more distinctively marked subspecies of horned larks, Streaked Horned Lark (Eremophila alpestris strigata, hereafter STHL, or lark), is restricted to the Pacific Northwest United States and southwestern British Columbia. Formerly widespread in coastal foredunes, prairies, riverine floodplains, and oak savannahs, strigata has declined because of habitat loss and alteration from agricultural practices, fire suppression, river channelization, and dune stabilization. This subspecies’ range formerly covered the entirety of lowland Washington and Oregon west of the Cascades, and a small portion of extreme southwestern British Columbia. Recent survey work suggests that populations are now confined to Oregon’s Willamette Valley, Washington’s southern Puget trough and coast, and the lower Columbia River Valley from Portland, Oregon, to the river’s mouth. The subspecies was recently listed as a Candidate for protection under the U. S. Endangered Species Act.

Very little is known of STHL current or historic breeding ecology in Oregon. It has received no applied conservation attention to date in Oregon that we are aware of, and only what preliminary descriptive breeding ecology we have been able to generate in the past 2 breeding seasons (2006 and 2007). Because of this preliminary work, there is now adequate knowledge of the breeding habitats which are attractive to this open country species in its Oregon range. Although STHL are largely dependent on the Willamette Valley’s abundant agricultural land for breeding habitat, a very small subset of mismanaged and marginal crop fields of various types in specific landscape settings appears to be suitable for these birds. They also inhabit restored vernal pool and upland prairie habitats with suitable disturbance regimes, as well as several of the region’s municipal airports.