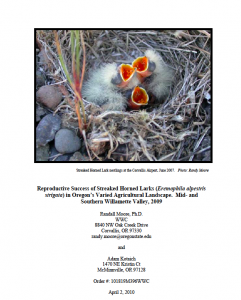 One of the more distinctively marked subspecies of horned larks, Streaked Horned Lark (Eremophila alpestris strigata, hereafter STHL, or lark), is restricted to the Pacific Northwest United States and southwestern British Columbia. Formerly widespread in coastal foredunes, prairies, riverine floodplains, and oak savannahs, strigata has declined because of habitat loss and alteration from agricultural practices, fire suppression, river channelization, and dune stabilization. This subspecies’ range formerly covered the entirety of lowland Washington and Oregon west of the Cascades, and a small portion of extreme southwestern British Columbia. Recent survey work suggests that populations are now confined to Oregon’s Willamette Valley, Washington’s southern Puget trough and coast, and the lower Columbia River Valley from Portland, Oregon, to the river’s mouth. The subspecies was recently listed as a Candidate for protection under the U. S. Endangered Species Act.

What follows details the results of fieldwork conducted in the southeastern Willamette Valley during breeding season 2009. The field work described herein is a direct continuation of investigation begun in breeding season 2008 (Moore 2009b, a), and was designed to refine our knowledge of the temporal and spatial variation in habitat- and locality-specific values of STHL reproductive success in this region, to identify variables, if any, that are associated with STHL reproductive success, and to identify direct sources of STHL reproductive failure.