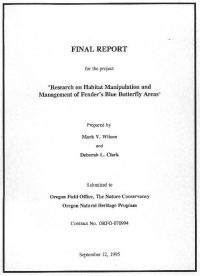 We report first-year results from two field experiments evaluating the effectiveness of various techniques for the control of pest plants of Fender’s blue butterfly habitat. In the woody-plant study, we monitored the effects of mowing, mowing and herbicides, and burning on woody plants and key native and non-native grasses and forbs. All treatments reduced woody plant cover, and no treatment significant harmed population of important native species. One year after manipulations, burning was the most effective overall treatment.

In the tall-oatgrass study, we monitored the effects of different mowing regimes on groups of native and non-native grasses and forbs. No regime caused a statistically significant decline in tall oatgrass, although mowing in early summer or late fall were particularly promising techniques at reducing non-native cover without diminishing native species. Removing cut material greatly reduced the effectiveness of mowing.

Burning in the woody-plant control study and certain mowing regimes in the tall-oatgrass control study performed well. As for the other treatments, nothing in these studies calls for halting the use of the pest-plant control techniques evaluated, except for the removal of cut material. On the other, the effectiveness of the techniques is still unclear, especially in promoting native species. Additional years of manipulations and monitoring should help resolve these issues.