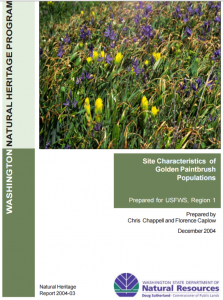 The Recovery Plan for the golden paintbrush, Castilleja levisecta, (USFWS 2000) stated that a high priority is the identification and clarification of site characteristics that are essential for golden paintbrush, both for management and reintroduction.

Region 1 of the U.S. Fish and Wildlife Service funded the Washington Natural Heritage Program (WNHP) to develop a list of site characteristics for the known sites for Castilleja levisecta. This work included soil sample collection for soils analysis, site visits, consultation of published soils and geologic data, and plant community characterization. This report summarizes the site characteristics of the known populations of Castilleja levisecta.

The vegetation associated with Castilleja levisecta is dominated by a mixture of graminoids and forbs. Shrubs are usually present in small amounts, and trees are rarely present. When moss is prominent the dominant species is usually if not exclusively Dicranum scoparium. Festuca roemeri was found only at the south Puget Sound site and was not even present in small amounts at any other site. We do not recommend planting Festuca roemeri on the northern Puget sites. Forbs dominate the vegetation at the two least disturbed northern sites and at some of the others also. We speculate that the pre-settlement vegetation on the mesic coastal prairies of Whidbey and San Juan that now support Castilleja levisecta was historically dominated primarily by forbs, with graminoids such as Carex tumulicola as a significant secondary component.

For reintroduction sites, we would recommend matching substrate and aspect to the closest known population. Even small changes of aspect on steep slopes may create conditions that are not favorable for Castilleja levisecta. We would suggest developing planting lists from species known from known populations of C. levisecta within the same geographic area as the reintroduction site.