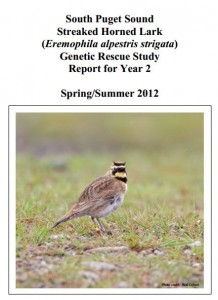 Hatchability of Streaked Horned Lark eggs in the Puget Lowlands of Washington State is extremely low relative to other grassland nesting birds at the same site and generally. Because genetic factors (inbreeding depression) appear to be a likely explanation, an effort to increase genetic diversity was initiated in 2011. 2012 was the second year of the genetic rescue effort initiated at the 13th Division Prairie on Joint Base Lewis-McChord. A total of eight breeding lark pairs and one unpaired male were detected within the study area. Hatchability of the Puget Sound nests increased to 84% in 2012, from 61% in 2011. It is unknown what might account for the increase in vital rates in 2012.

In 2012, no egg-clutches were translocated to Puget Sound nests from Corvallis, Oregon. This was due to significantly high nest failure at the Corvallis airport (floods and then mass predation) and the difficulty of matching egg-clutch incubation timing. Because of the low productivity of the Oregon airport population in the early- to mid-season, the egg swap effort was abandoned in mid-July.

In 2012, one Oregon translocated nestlings returned to 13th Division Prairie as an adult male, but this male did not breed successfully with a female in 2012. Assuming that the male survives its second winter, returns to 13th Division and successfully reproduces in 2013, the local population of Streaked Horned Lark could be rescued, which can lead to improved fitness and reduced extinction risk. Subsequent monitoring will determine whether the male or other translocated birds return to breed.