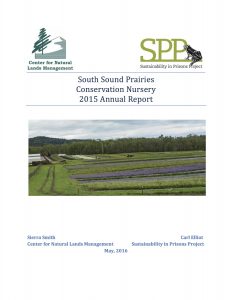 Expansion to the North Sound
The success of the regional nursery model in the South Puget Sound has prompted the USFWS to contract CNLM to establish a similar effort in the North Sound and Olympic Peninsula. Substantial former prairie land exists on the islands of the North Puget Sound with potential habitat for golden paintbrush, Taylor’s checkerspot and island marble butterflies. Several agencies and land managers are working towards prairie and oak woodland restoration but appropriate seed is not available in large quantities. CNLM is working to understand the volume and diversity of native seed needed across the region for existing and planned restoration activities and to establish ample seed production. This collaborative effort involves more than half a dozen local organizations and nurseries collecting seed and growing plant plugs with the bulk of the large scale seed production occurring at CNLM farms in the South Sound.

Seed Center Overhaul
Substantial upgrades to the seed processing center at Shotwell’s Landing have been necessary to keep pace with expanding seed production and partnerships. Several seed cleaning machines have been added to the workshop, greatly increasing both capacity and precision in the shop. This year the seed cleaners kept pace with farm production and were able to clean seed for partner agencies with a one week turn around. Importantly for the comfort of our employees and volunteers, we’ve added a dust collection system to the seed shop with hoods over each machine.

Seed Production in Prisons
The Sustainability in Prisons Project continues to adapt to the region’s conservation needs and has expanded their nursery operations to include raised bed seed production in prison facilities. Inmates are now growing all violet seed used on South Sound Prairies and will be expanding to more species in 2016. Violet seed has been particularly troublesome to produce in large quantities as daily harvest of individual pods is required over a six month period. Under SPP, violet seed production more than doubled to 10.5 pounds.

Bringing Wildflowers Back to the Prairies
Recent reviews of historical records suggest that the South Sound Prairies were once home to a great diversity of native annual species. These plants are almost entirely lacking from today’s prairies. In 2015, the seed farm focused on scaling up production of native annuals primarily for restoration on Joint Base Lewis McChord and for Taylor’s checkerspot butterfly recovery. Nearly half of all seed grown by CNLM in 2015 was from annual species with 322 pounds of seed from 17 species provided to restoration partners. Annual species are important for occupying space in the first year after fire or other disturbance and for providing nectar to native pollinators.