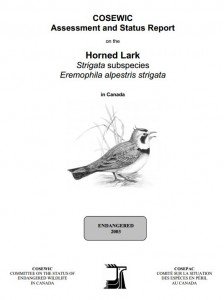 The Horned Lark, strigata subspecies is essentially extirpated in British Columbia and Canada. Breeding has not been confirmed since 1978. Breeding populations in the 16 Fraser delta appear to be gone, even though they were not difficult to locate in some areas in the 1960s. Sightings of even single birds in the 1990s and 2000s are very rare: The news of the arrival of one Horned Lark, strigata subspecies on Vancouver Island in 2002 was greeted with astonishment by all knowledgeable persons.

Populations in the USA (Washington and Oregon) have suffered severe declines in numbers and in extent of distribution. Only about 300-500 birds are thought to exist between those states, and that population comprises the only remaining members of this subspecies.

Suitable natural habitats such as sand dunes, spits, and sparsely-vegetated grasslands are extremely limited. In coastal British Columbia, these natural habitats have been used extensively for farming, housing and light industrial purposes. Other suitable short-grass habitats such as pastures, farms, spoil piles, and other bare lands are available, but declining, and are subject to increasing intensity of human disturbance. Although airports may provide some of the last available habitat, this presents unique habitat management challenges in that the first responsibility of the airport manager is to provide a safe place for airplanes to operate and this typically involves a mowing regime that is not conducive to ground nesting bird reproductive success (Beauchesne 2002). A few small areas that were formerly used for nesting are protected within regional parks on Sea and Iona Islands, but are not managed as breeding habitat for Horned Larks.

There is potential for managing existing habitat in a few protected areas for Horned Larks, but this would require careful consideration of rare plants and other rare wildlife species. Reduction of human disturbance in suitable areas may be problematic as there is very high demand for use of open spaces for recreation within the range of the Horned Lark, strigata subspecies. Recovery will require an international effort to conserve and enhance existing habitat, create new habitat, and to increase productivity of remnant populations.