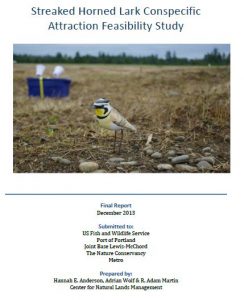 The Streaked Horned Lark (Eremophila alpestris strigata,  HLA) was recently listed as Threatened across their range
under the federal Endangered Species Act. Population and range reduction, habitat loss, and the loss of ecological processes that created the early successional habitats that larks prefer, have all contributed to the species’ decline. Since most SHLA populations don’t reside on protected lands, techniques that could promote or attract birds to protected habitats could be a vital tool in increasing demographic rates and assisting in species recovery. This feasibility study assessed the utility of using conspecific cues (audio playbacks of songs and calls, as well as three-­‐dimensional decoys) in association with the creation of desired habitat to lure birds from established breeding areas to these newly created habitats. This study measured success at three levels:

1. A male SHLA occurs at a relocation site during any portion of the relocation attempt

2. Both sexes occupy relocation sites during any portion of the attempt

3. Evidence of breeding is documented at the relocation sites

After two years of observations we had 23 detections of SHLA, 20 of which occurred in playback (treatment) plots, suggesting birds respond to conspecific cues. We met success criteria 1 and 2, but larks did not establish breeding territories in treatment plots. Because larks have extremely high site fidelity and suitable habitat may not be limiting, conspecific attraction alone may not be sufficient to attract larks to a new site. However, coupled with careful threat reduction at protected sites and deterrents at occupied sites, conspecific attraction could be a tool to be used with caution in the conservation of SHLA.