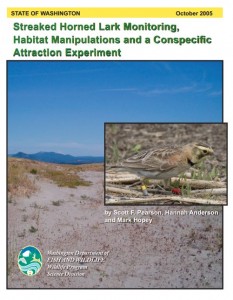 The Streaked Horned Lark (Eremophila alpestris strigata) is a rare subspecies of the Horned Lark that breeds and winters in Oregon and Washington. Recent Streaked Horned Lark research has focused on documenting changes in the subspecies breeding range (Rogers 2000), inventorying and locating current breeding (Altman 1999, Rogers 1999, MacLaren and Cummins 2000, Pearson and Hopey 2004, 2005) and wintering (Robinson and Moore unpubl., Pearson et al. 2005) populations, identifying the important characteristics of breeding and foraging habitat (Altman 1999, Rogers 2000, Pearson 2003, Pearson and Hopey 2004, 2005), and experimenting with methods to improve Lark habitat (Pearson and Hopey 2005). In addition, British Columbia recently completed a status report on the Lark (Beauchesne and Cooper 2003), another has been drafted by Washington Department of Fish and Wildlife (Stinson 2005), and a range-wide population assessment and conservation strategy was written by Pearson and Altman (2005).

The goal of this work is to build upon our previous monitoring and habitat selection research and to investigate methods for improving Lark habitat and methods for creating new populations. The specific objectives of this research are: