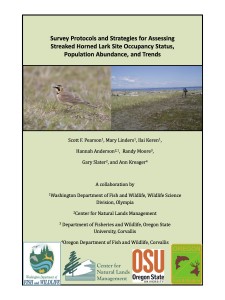 The streaked horned lark (Eremophila alpestris strigata) is listed as threatened under the Federal Endangered Species Act (USFWS 2013) and as endangered by the State of Washington, yet no standardized range-wide survey protocol or monitoring strategy exists. Assessing population distribution, abundance and trends is critical for making informed management decisions and to understand relationships between animal populations and environmental conditions. Such information is used to describe changes in the size of rare or declining populations, identify mechanisms for population changes, assess changes in ecological conditions, and evaluate the effectiveness of conservation actions (e.g., progress towards recovery).

The first step in this process is to develop a landscape-scale map that would quantitatively or qualitatively express the probability of lark occurrence within the defined map extent based on factors determined to affect occupancy. This map would then be used to concentrate survey, management, conservation, and other efforts in areas where occurrence probability is moderate to high, while also enabling such efforts to be reduced or eliminated in areas of low probability of occurrence. This results in a much more efficient and for a statistically based sampling approach. The second step is to develop species-specific survey protocols to determine site occupancy status using methods that take into account the uncertainty associated with detecting the presence of animals. The final step is to develop a strategy for assessing species abundance and trends within occupied sites.

We organize this document as follows: