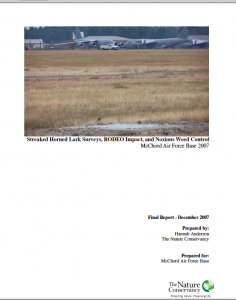 In 2007, McChord sponsored a 2-week international flight competition event (RODEO). The event was held from July 15th through July 28th . While this was not the peak breeding time for the lark, it is well within the known breeding season, late April through early- to mid-August in the Puget Lowlands (Pearson and Hopey 2005). During RODEO planes, jets, and people gather at the airfield for 2 – 2 ½ weeks. Flight competitions occur for 1 week, but people and aircraft are present on the airfield throughout the entire RODEO period. RODEO is held in the northeast portion of the airfield, along the F ramp (Figure 2), an area often used by larks for nesting, foraging, display, and song. During RODEO, this same area is used to park aircraft. In addition to the aircraft and personnel themselves on the pavement, the event requires infrastructure for participants including large canvas tents set up adjacent to pavement pads on the grassland itself, areas designated for running the aircraft engines prior to take-off, lighting and accompanying electrical cords that are drug through the grassland during set up and removal, as well as vehicles driven across pads and grass. McChord is planning to sponsor the RODEO competition again in 2009. Objectives There were 4 main objectives for the work conducted by The Nature Conservancy at McChord during the 2007 breeding season: 1. Conduct at least 2 entire airfield breeding adult lark surveys using protocols previously established by Scott Pearson, Washington Department of Fish and Wildlife, Wildlife Program, Wildlife Research Division. 2. Map locations of all birds observed during the all airfield surveys 3. Conduct at least 4 visits/surveys in an attempt to map the locations of territorial and nesting birds before and after the RODEO event. 4. Conduct streaked horned lark habitat management actions including survey and control treatment of knapweed on airfield.