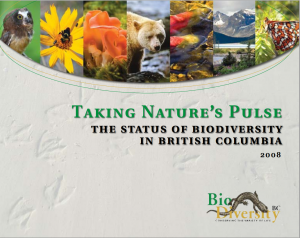 British Columbia is a spectacular place, known worldwide for its natural beauty and diversity. The province’s ecosystems provide habitat for a vast array of plants and animals and have sustained human
populations for at least 10,000 years. Although we continue to derive huge benefits from these natural systems, their true value and significance is not fully understood. Nor do we fully understand the potential threats to the environment caused by our expanding human footprint.

This report, Taking Nature’s Pulse: The Status of Biodiversity in British Columbia, is a comprehensive,science-based assessment of the province’s natural environment. Its purpose is to assist British Columbians in making informed choices regarding biodiversity. The scope of the report is B.C.’s terrestrial and freshwater realms, including their overlap with the marine realm.

Taking Nature’s Pulse was developed by Biodiversity BC, a partnership of government and non-government organizations with a mandate to produce a biodiversity strategy for British Columbia. Scientists – both provincial and international – played a key role in shaping and building the report through the preparation of technical background reports and peer reviews of the report as it was being drafted.

The report has four main sections. Section 1 provides background on biodiversity, including its attributes, importance and history in B.C. Section 2 describes the current status of B.C.’s ecosystems, species and genetic diversity, and key and special elements. Section 3 outlines the threats to biodiversity. Section 4 presents the major findings of the assessment.

Go to "Taking Nature’s Pulse the Status of Biodiversity in British Columbia" on Bio Diversity B.C.