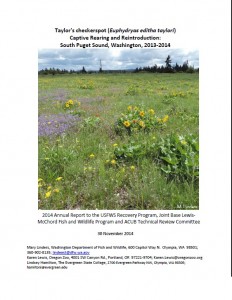 In 2014, one new site in South Puget Sound was selected for reintroduction of Taylor’s checkerspot: Training Area 7S (TA7S) on Joint Base Lewis-McChord. Larval releases continued at Glacial Heritage Preserve (GHP; initiated in 2012) in 2014, and Scatter Creek South (SCS; initiated in 2007) received adults. Range 50 (R50; initiated in 2009) received three sequential releases of Taylor’s checkerspot through 2011; monitoring for establishment is ongoing there and at Pacemaker (PCM; initiated in 2012), where no further releases are planned. A total of 8,258 eggs were produced between the Oregon Zoo and Mission Creek captive rearing facilities, with 54.2 percent (4,475) of eggs produced by known lineage captive-mated females and 45.8 percent (3,783) of eggs produced by wild females. A total of 1,522 postdiapause larvae were released at TA7S on 7 March 2014 (670 in Plot A, 778 in Plot B, 25 each in Control Plots 1 and 3, and 24 in Control Plot 2). Also on 7 March 2014, 1,086 larvae were released at Glacial Heritage Preserve (871 in Plot H, 165 in Plot 165, and 25 each in Control plots 1 and 2). In addition, a total of 56 adult Taylor’s checkerspots were released from the Mission Creek facility once their roles in mating trials and oviposition were complete. We used distance sampling to quantify daily population density, daily population size, and to illustrate the distribution of adults at the release sites and three other sites, PCM, R50 and R76 (source site). A combined total of 4,901 checkerspots were counted across six sites (R76, R50, SCS, PCM, GHP and TA7S) during distance sampling surveys in 2014, a 60 percent increase compared to the 2013 count. Long-term monitoring and population goals developed in fall 2012 were used to assess progress at R50. Based on those criteria, that site far exceeded the target of 250 adults on a single day in both 2012 and 2013, based solely on natural reproduction. The peak single day abundance estimate in 2013 was 1,166 adults (range 891-1,527). The peak raw count for 2014 (406) suggests abundance estimates will exceed the target in 2014 as well. Adults were distributed across the majority of the 22-ha monitoring area in 2013, and while their distribution in 2014 was somewhat reduced, they still occupied the site from north to south and east to west. Baseline standards will need to be met for five consecutive years based solely on reproduction in the field to meet the actual threshold established for success. This report summarizes captive-rearing work conducted in May 2013-May 2014, and reintroduction work from July 2013-July 2014.