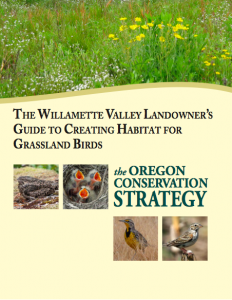 Grassland birds in the Willamette Valley are in trouble. With less than one percent of the area’s historic prairie habitats remaining, the species that depend on open, grassy areas to feed and raise their young are declining. At the time of Euro-American settlement, the Valley was a mosaic of wet and dry prairies, oak savannas, and forests. Native Americans, who used many of the prairie plants for food, set fires to grasslands to enhance the growth of their favorite plants and create open areas for hunting and traveling. Fire prevented many shrubs and trees from growing, resulting in vast grasslands and wildflower meadows. Since that time, development and land use, cultivation and restrictive and alternative burning practices have all altered the landscape.

Although it is impossible to recover the prairies lost to development and cultivation, many grassland birds can live alongside people if the existing habitat, e.g. grasslands, fallow fields and pastureland is suitable. Alternative management techniques such as mowing and grazing can be used to mimic historical disturbance regimes. Ungrazed pastures dotted with shrubs can provide great year-round habitat. Lightly grazed or mowed pastures are also good habitat if mowing and grazing are rotated and timed to allow young birds to fledge and for flowers to seed. These surrogate grasslands can provide diverse plant structure and variability sufficient to allow for a place for birds
to nest and feed. Wildlife and conservation reserves such as the Basket Slough National Wildlife Refuge north of Dallas or the William L. Finley National Wildlife Refuge near Corvallis provide excellent examples of good habitat for grassland birds.

By maintaining and restoring habitat for grassland birds, landowners will help not only them but many other plant and wildlife species as well including the Western pond turtle, Fender’s blue butterfly, Kincaid’s lupine and California quail. Habitat restoration also contributes to watershed health by reducing soil erosion and increasing water retention.