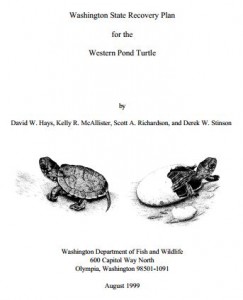 The western pond turtle (Clemmys marmorata) is listed by Washington State as an endangered species. The species is not listed under the federal Endangered Species Act. It was petitioned in 1992 for federal listing, but the Fish and Wildlife Service found that listing was not warranted in 1993.

This highly aquatic turtle occurs in streams, ponds, lakes, and permanent and ephemeral wetlands. Although pond turtles spend much of their lives in water, they require terrestrial habitats for nesting. They also often overwinter on land, disperse via overland routes, and may spend part of the warmest months in aestivation on land. Pond turtles are generally wary, but they may be seen basking on emergent or floating vegetation, logs, rocks, and occasionally mud or sand banks. In Washington, the species overwinters in mud bottoms of lakes or ponds or in upland habitats adjacent to water bodies. Nesting occurs from May to mid-July in soils with scant vegetative cover. They usually nest within 100 meters of water, but occasionally up to 400 m. Western pond turtles are long-lived, with some reaching an estimated maximum life-span of 50 to 70 years, though most individuals may not live that long. They require more than 10 years to attain sexual maturity.

The range of the western pond turtle extends from the Puget Sound lowlands in Washington south to Baja California. Western pond turtles were essentially extirpated in the Puget lowlands by the 1980’s. Their present range in Washington is thought to be composed of two small populations in Skamania and Klickitat counties, and a small pond complex in Pierce County where they were recently reintroduced from captive bred stock.

The initial cause of the decline in western pond turtle numbers in Washington may have been commercial exploitation for food. Western pond turtle populations cannot be sustained under exploitation, due to their low rate of recruitment and lower densities at the northern portion of the range. Pond turtles never recovered from this decline, in part, due to concurrent or subsequent alteration and loss of habitat. Wetlands were filled for residential and industrial development, particularly in the Puget Sound region. Dam construction and water diversion projects reduced available habitat and isolated populations. Introduced predators such as bullfrogs and warm-water fish, which were introduced to lakes and ponds, probably took a toll on hatchlings and young turtles. Human disturbance may have kept females from crossing over land to lay eggs, or may have reduced the amount of time spent basking, which in turn, may be important for egg maturation. Loss of lakeside emergent wetland vegetation to grazing and trampling may have made habitat less suitable for hatchlings and juveniles. Successional changes through fire suppression on native grasslands may have resulted in excessive shade on nesting grounds.

An unknown disease killed at least 36 turtles in Klickitat County in 1990, an estimated one third of the population. A captive breeding program has been underway to build a population of turtles for release into suitable Washington habitat. A head-start program is being used to enhance the survival of hatchling turtles from wild nests. Control of introduced predators and habitat enhancement efforts are ongoing where western pond turtle populations are found. The Department of Fish and Wildlife has acquired land in Klickitat County which supports one of the key surviving western pond turtle populations in the state.

The western pond turtle has been extirpated from most of its range in Washington. Two populations remain in the Columbia River Gorge. The total number of western pond turtles in known Washington populations is estimated at only 250-350 individuals, approximately half of which went through the head-start program at the Woodland Park Zoo. Additional turtles may still occur in wetlands that have not been surveyed in western Washington and the Columbia Gorge.

The western pond turtle is declining throughout most of its range and is highly vulnerable to extirpation in Washington. They are still abundant in northern California and southern Oregon wherever there are relatively few people. The species requires a continued recovery program to ensure its survival in the state until sources of excessive mortality can be reduced or eliminated.

The goal of the recovery program is to re-establish self-sustaining populations of western pond turtles in the Puget Sound and Columbia Gorge regions. The recovery objectives are to establish at least 5 populations of >200 pond turtles, composed of no more than 70% adults, which occupy habitat that is secure from development or major disturbance. It is also necessary that the populations show evidence of being sustained by natural recruitment of juveniles. The core pond turtle sites should be wetland complexes that may be less susceptible to catastrophes than sites of a single water body. The recovery objectives need to be met before the western pond turtle would be considered for downlisting to threatened. Objectives for downlisting to sensitive are similar, except 7 populations of >200 pond turtles will be needed.

Go to "Washington State Recovery Plan for the Western Pond Turtle" on Washington Dept. of Fish and Wildlife